Pursuing higher education and attending university is the final stepping stone for most people before entering the professional world. It's where you'll meet a diverse group of people who will challenge you.

Getting thrown in with individuals who have varied experience will teach you a thing or two and it's awesome. Although, not everyone you meet will create a positive impact in your life.

This was the harsh reality a 20-year-old female student learned recently. She shared her experience interacting with a male classmate on Reddit's Am I The A**hole (AITAH) sub.

OP (original poster) said that she has been casually talking to one of her male classmates who she referred to as 'R'. He was friendly to her at first but has recently moved to sending her flirtatious messages.

She chose to ignore and not react to his flirty messages until R asked her out. OP politely declined his offer and even apologized if she somehow gave him any vibe that she was interested in dating him.

R then ghosted her but chose to ask her out again 2 days later which OP declined once again. R replied that he gave her 2 days to think it over and she should be grateful that he asked her out.

OP understandably got pissed and basically to the guy to leave her alone. R reacted in the worst way possible.

After OP declined R's offer for a date the second time around, R got incredibly angry.

He insulted OP and resorted to slut-shaming her. He even got his friends to harass OP as well and continue the tirade of insults.

After OP got harassed, she took matters into her own hand and decided to use her social media to call OP and his friends out for their disgusting behavior.

OP collected screenshots of their conversation (including the insults) on her story and about 300 people read them.

One of those people was their program's placement mentor, a senior student. OP proceeded to block all of the men who insulted her and didn't think about them anymore.

The department head (DH) called OP in for a meeting and got her statement about the issue.

OP bravely showed the DH everything and that was the final nail on the R's coffin. He got suspended for 3 months and subsequently lost a coveted government internship.

One of their professors (aka Professor P) loves R and decided to call OP into his office. Professor P urged OP to make a statement that she forgave R and she was also to blame for the incident.

OP was once again summoned into the DH's office along with R, his parents, Professor P, and another professor to discuss their situation.

The department head asked her if she was willing to forgive R which will null the suspension. OP admits that she wants R to suffer the consequences of harassing her, so she said she wasn't ready to forgive him.

R's mother yelled at OP in front of everyone. She said OP led R on and that she was only doing this to eliminate her competition and even worse than that, the mother said, R is the victim in the situation.

The DH didn't listen to any of the mother's rude statements and rightfully suspended R for 3 months. Their internship has now started and OP's friends told her she took things too far.

They feel the punishment doesn't fit the crime because the harassment only happened through text messages. Other people in their class have also labeled OP as a bully and an a**hole for ruining R's bright future.

Professor P also told OP that he was extremely disappointed in her and it's because of girls like her that men get their careers ruined. She cried because of this.

OP now wants to know if they were right that she took things too far and was wrong for reporting R's unacceptable behavior.

You can read OP's story below:

Professor P needs a rude awakening like this redditor says

Yes, OP should make note of everything for future use

But this user believes that the issue should be addressed immediately

Another person replied that it's safer for OP to wait 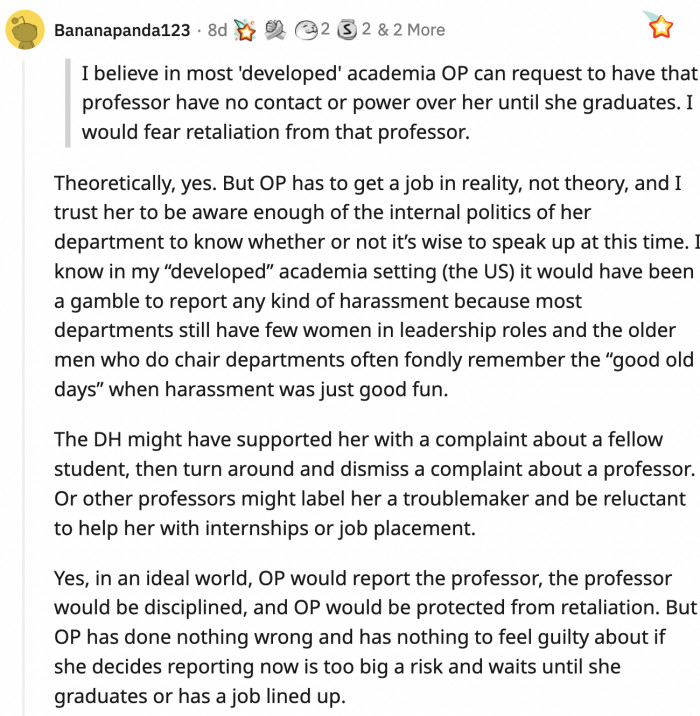 Helpful redditors chimed in with their practical advice 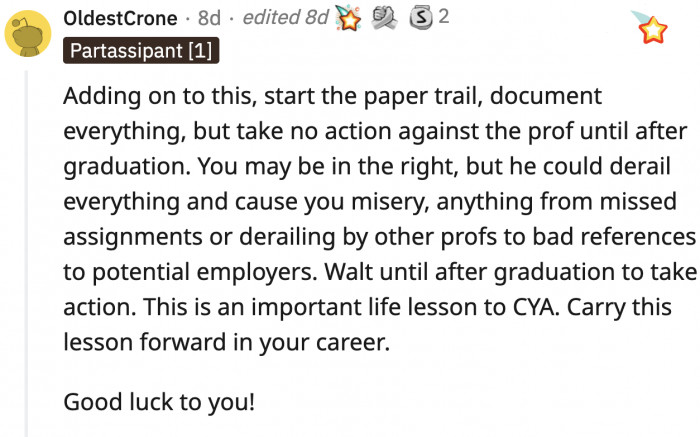 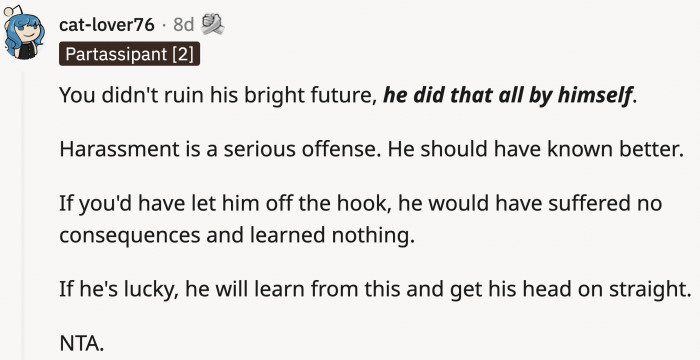 The judgmental classmates are immaterial in this case

Silence never helps the victims, only the perpetrators

No matter how you twist the story, there's no justifying R's behavior

The commenter clarified that those people are wrong

Another user replied and asked OP for a wonderful favor 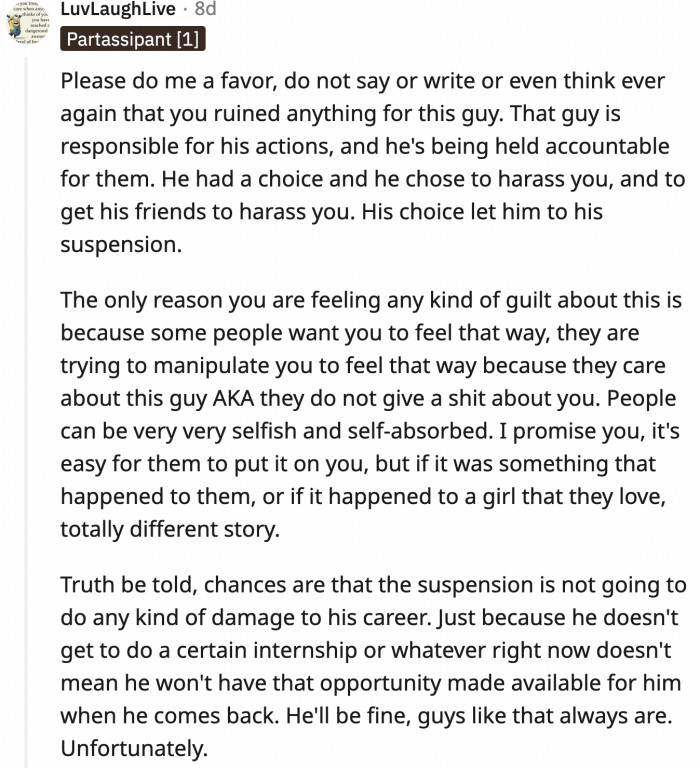 What does that even mean "girls like you"? The professor also needs to be called out, honestly.

Enough with this defense! He should have thought about his future before harassing OP!

If he really is a top student, he'll bounce back

This commenter is enraged on behalf of OP...

... OP mentioned the reality of her unfair situation where women's rights are not given importance.

It's only recently that people are starting to call out behaviors from men that were previously excused as "boys being boys" or their attempt with comedy.

Professor P's reaction though wrong is not surprising. It's difficult for a lot of people to admit that the way they behave is unacceptable and it's easier for these people to just blame the victim.

Everyone, not just women, should trust their gut when they feel like their boundaries are being violated. It's not your fault that harassers lose their career or "bright future" because of their toxic ways.

It's their fault. They chose to behave that way and must now face the consequences of their horrible actions. Don't make excuses for their misogyny and call it out the way OP did.

What did you think of Reddit's reaction to the story? Will you react the same way as OP or not? Share your perspective on things down in the comments!

People Share Those Ridiculous Things Parents Ingrained In Us, And We Can’t Shake Off Now

Company Denies An Employee's Vacation Request And Then Buckles Under Pressure, Pleading With Ex-Employee To Return

Babysitter Calls The Cops On The Mom When She Fails To Come Home On Time, Now The Mom Is Getting Investigated By Authorities