Some genuinely good people help others out without expecting anything in return. These kinds of people are those who put others first, even complete strangers, before themselves.

It's not easy to find these people but every now and then we hear about their stories. A story much like this one recently popped up in the ever famous Am I The A**hole sub or Reddit.

The original poster (OP) was u/dogwalker-aita who shared an infuriating interaction between him and his new neighbor. Our OP is has lived in his home for 5 years when he noticed his elderly neighbor having a hard time walking her dog, Frank.

The elderly lady next door is 86 years old and good boy Frank is a 10-year-old dog. When OP noticed the lady walking and cleaning up after Frank with difficulty, he readily offered to walk him daily for free.

The neighbor gladly accepted the generous offer and the 2 neighbors have been great neighbors ever since. Here comes their new entitled neighbor.

OP shared his daily routine with Frank and seeing this opportunity, the new neighbor asked if OP could walk her 3 dogs as well. OP said no of course.

The entitled neighbor didn't like OP's answer at all and told him that she's a single mother. She said it wasn't fair for her to walk her dogs while simultaneously raising her children.

OP cordially replied that while the single mom's situation sucks, it wasn't really his problem. Ever since then, the entitled neighbor kept asking OP to walk her dogs while giving wild excuses.

The final battle between two neighbors happened when the single mom hosted a Halloween party for her children and asked OP to once again, walk her dogs since she's too busy hosting the party to do it.

OP's endless patience ran out and he yelled at her, "How many times do I have to say no!? Like d*mn woman, this is like the 300th time and it's only been 8 months—walk your own d*mn dogs!"

After dropping that well-deserved tongue lashing, OP walked Frank. As expected, the lady didn't like the way OP snapped at her and he received a long letter from her basically calling him out for not walking her dogs. 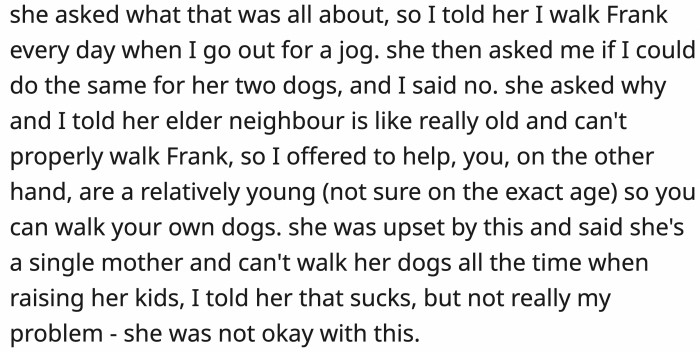 For once, Reddit was united in their answer. It was a resounding no that OP was not the a**hole in this situation.

OP was thinking of installing a doggy door in the old lady's home to avoid running into the entitled new neighbor. 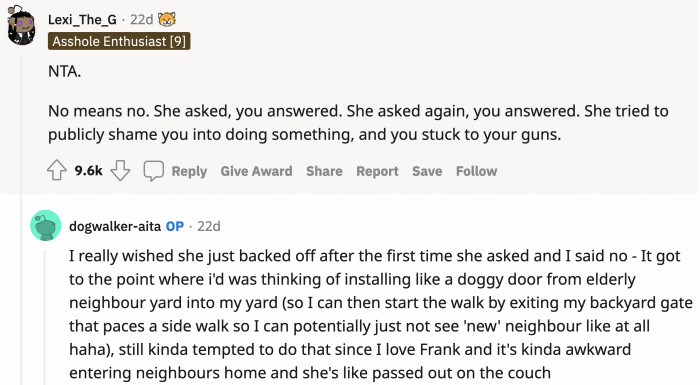 It's a smart move to keep that letter just in case the new neighbors becomes even more unreasonable.

Some people just really think the world owes them everything. 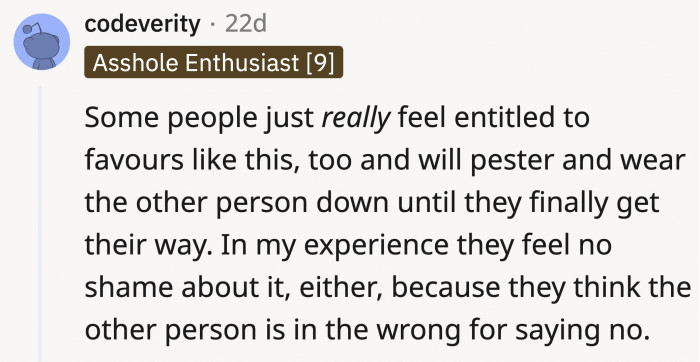 Another single mom had this to say: 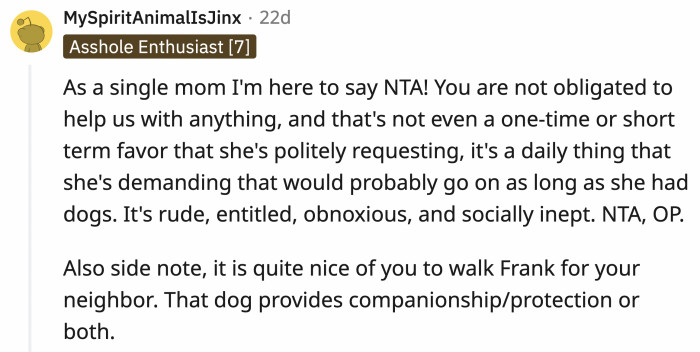 Pretty obvious answer according to this person

Asking once and getting declined is one thing but repeatedly harasing someone you don't know to do something for you is trash behavior.

According to OP, he would have been understanding if the lady just asked once but she didn't stop! And apparently, he hasn't seen her walk her dogs ever since she moved in! 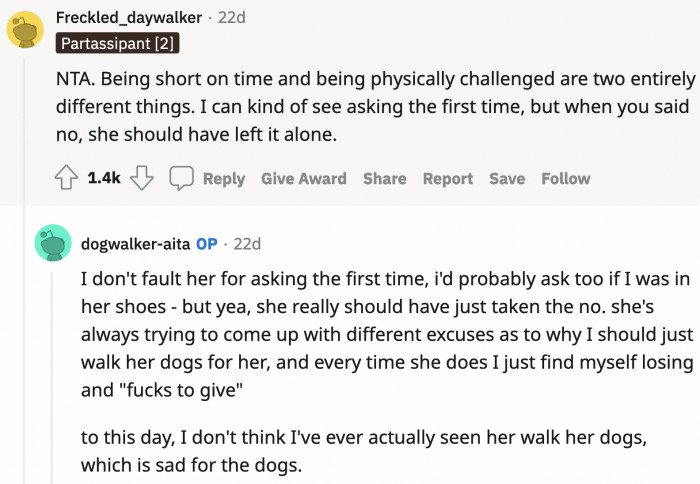 Gather evidence and this person is right.

It will take a few hours of your day and that's 4 dogs in total if OP said yes to her.

According to OP, the old lady actually pays her in cookies.

Obviously, the old lady needs the help more than the able-bodied single mom...

Good for you OP says this commenter!

This person suggests that OP should agree to walk the 3 dogs straight to the rescue center...

... but OP doesn't relish the idea of interacting further with the entitled neighbor.

This commenter wondered if the lady ever offered to pay... 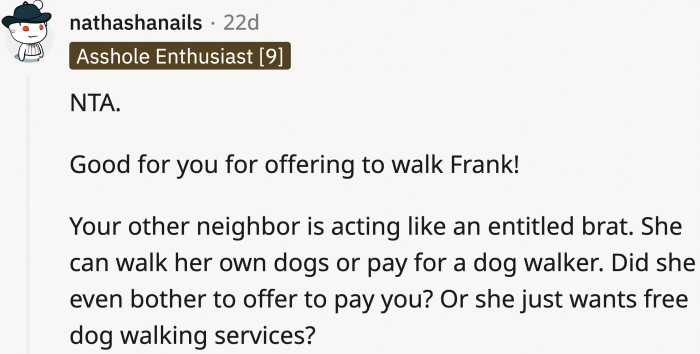 The perfect analogy to sum up the frustrating neighbor's reasoning:

This was a pretty clear situation where OP was not in the wrong. Sure, being a single mom is challenging but that doesn't mean you can just expect people to do things for you to make your life easier.

It's not okay to demand free labor. If you ask and the other person says no, respect their decision to decline whatever favor you asked for.

Hey, at least OP is still friends with Frank and the elderly neighbor! Those free grandma cookies sound heavenly to be honest.