It's another glorious day for the dog lovers of the world thanks to the Internet. Time and time again, dogs and their adorable, delightful, and silly shenanigans are shared across multiple social media platforms for the honor or sharing joy with as many dog lovers as possible.

Did you know that in recent years we have logged that there are over 470 million dogs kept as pets in the world? It's no wonder we have a steady stream of dog content to partake in!

Still, with that many dogs and so many different forms of social media it can be a bit difficult to stay on top of it all, and it may seem like you have some kind of boring posts to wade through to capture the true gems? Not that there is anything wrong with nothing more than cute pictures of dogs, but sometimes you just need to see the best of the best.

That's where we come in, ready and willing to organize the steady stream and make sure your valuable time is spent absorbing the best of the best. Believe me, there's plenty of "bests," and these doggos and puppers 100% prove that not all dog stories, photos, and videos are created equally.

1. "Remember my toad licker? Tonight, the hubs forgot and Rico was outside for an hour. After donning shoes and getting a flashlight, Rico was found staring at an upside down toad."

"I did not take a photo of poor Mr. Toad, because he was belly up with one leg straight out and I was mortified and pissed that my frothy, glassy-eyed chihuahua had graduated from molester to murderer. After an hour of pointedly ignoring complicit hubby and homicidal addict dog, I loudly announce I’m going to dispose of the poor toad.

Y’all. The toad is alive. Perfectly healthy. The little booger FAKED his own death so my dog would stop freaking licking him just to get his hallucinogenic jollies.

Picture of the toad licking junkie taken minutes ago. No shame. None. Note the tongue casually stuck to his paw." 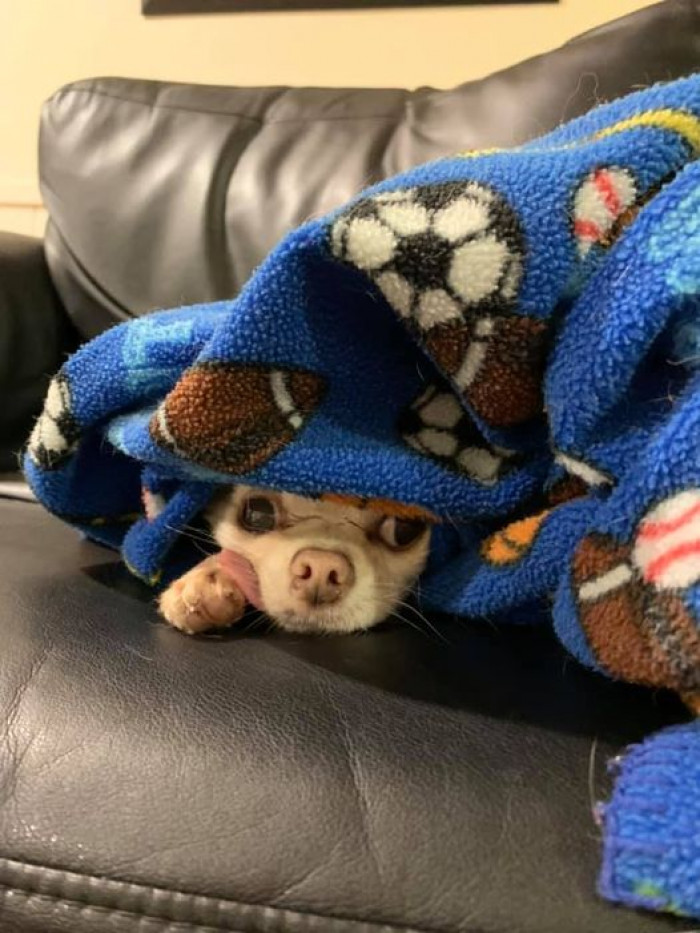 "This is Bagel, Bagel is a girl. Bagel is in her cone because she's bad and eats stitches for a living." 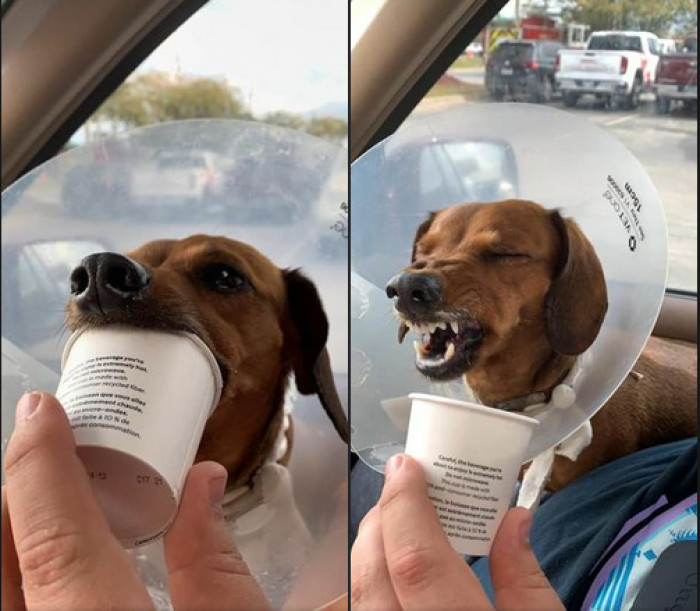 3. Such loving devotion could bring a tear to your eye if you're not careful!

5. Not even humans give hugs this heckin' precious. 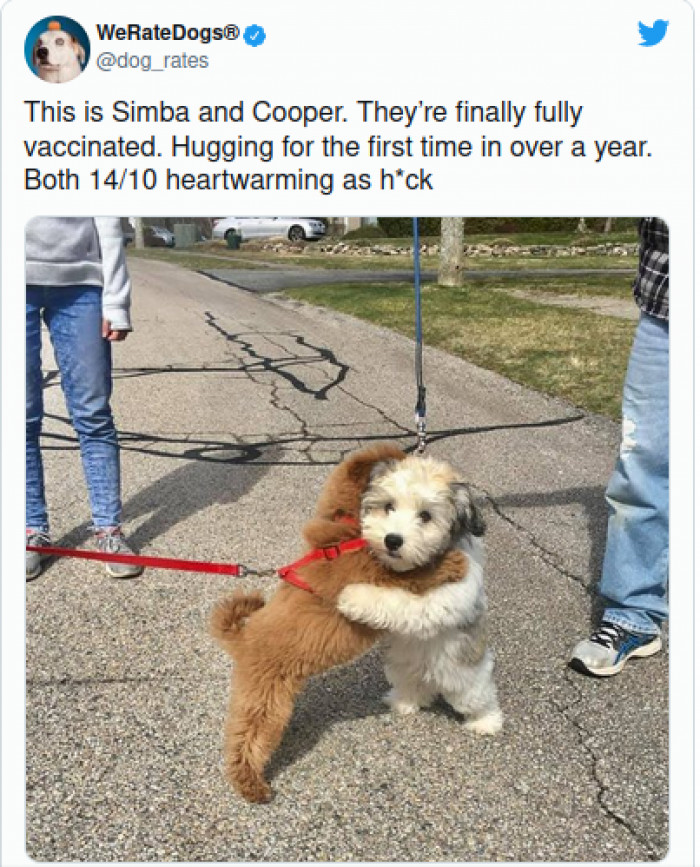 6. Dogs don't hesitate to enjoy the latest and greatest on Netflix, either.

7. That facial expression is as gentle as it gets, but still clearly sends a message: "mom, you need help." 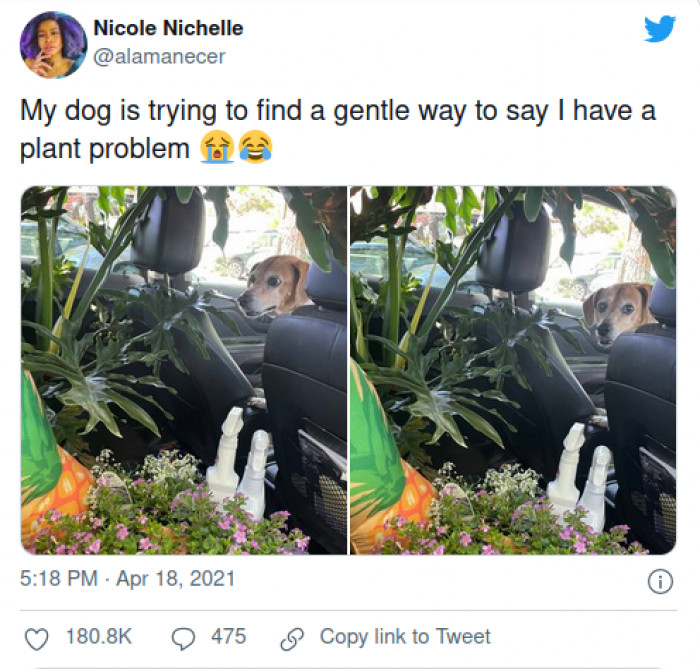 According to the ASPCA:

"Every year, approximately 6.5 million companion animals arrive at one of the community animal shelters nationwide."

That staggering statistic only applies to the United States and includes 3.3 million dogs. Sadly, 1.5 million animals are euthanized every year, so continuous commitment to seeing animals find their forever homes and leave shelters to be adopted is an extremely important goal that any animal could and should be invested in.

8. "Ethel Mae the sassy pigbull turned 3 yesterday! She partied with her best friend at school, went on a shopping spree, and enjoyed a surprise party with her fur siblings." 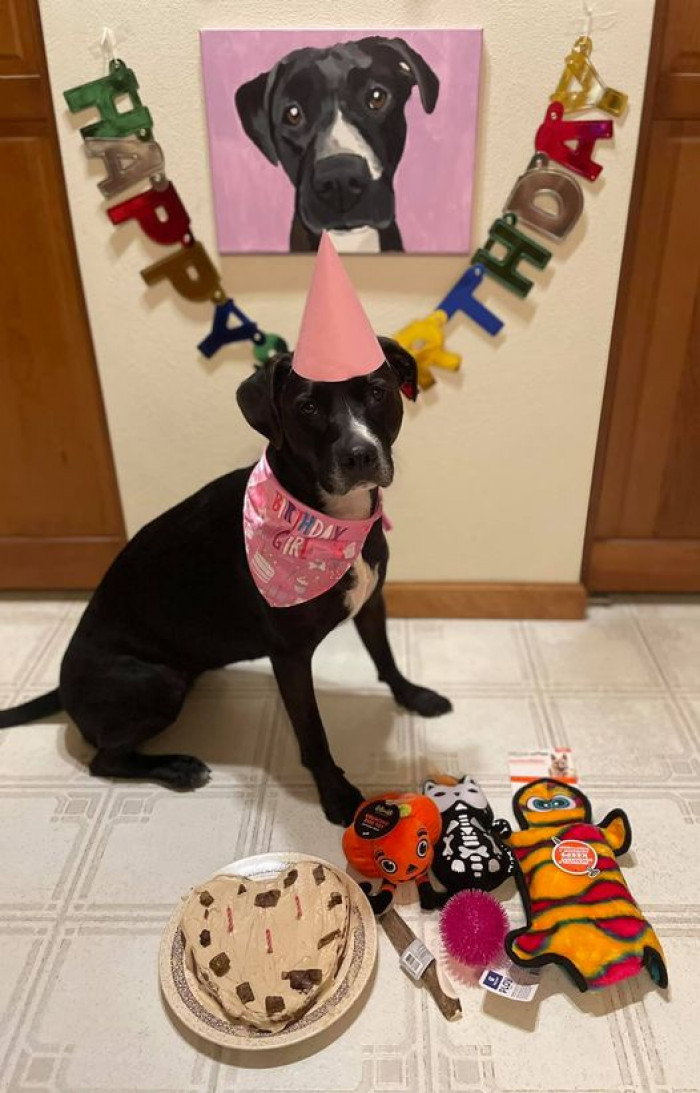 9. I think she knows precisely how phenomenal she is. 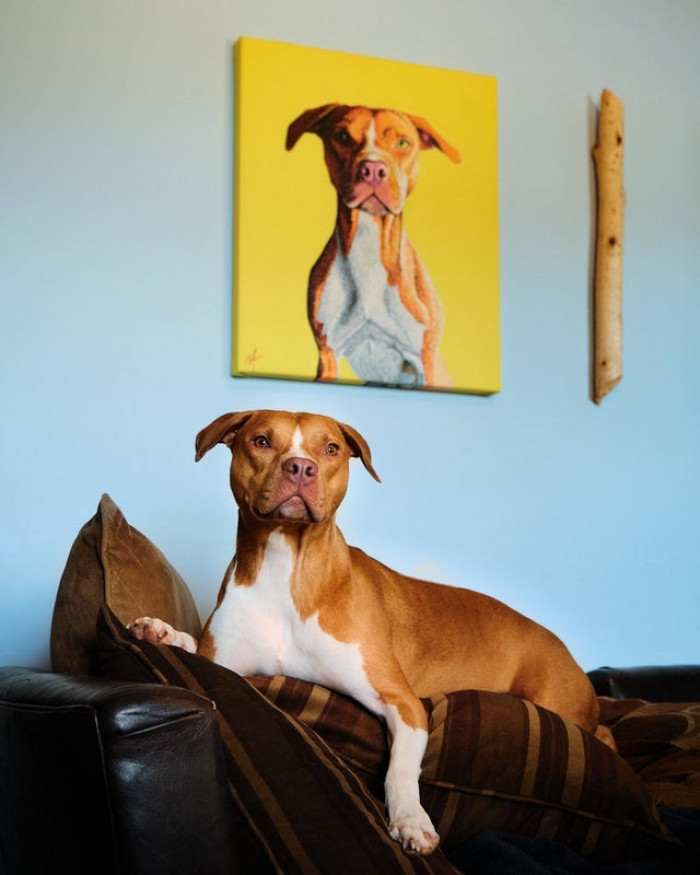 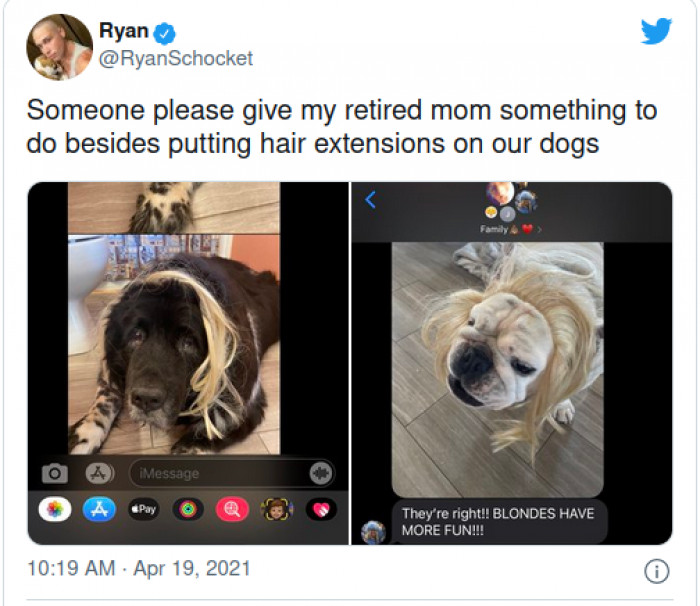 12. Such a sincerely good play friend.

13. Shy pupper has a fantastic as heck sort of day:

14. "Think someone may have run off with my rolling pin... Not that she looks very guilty." 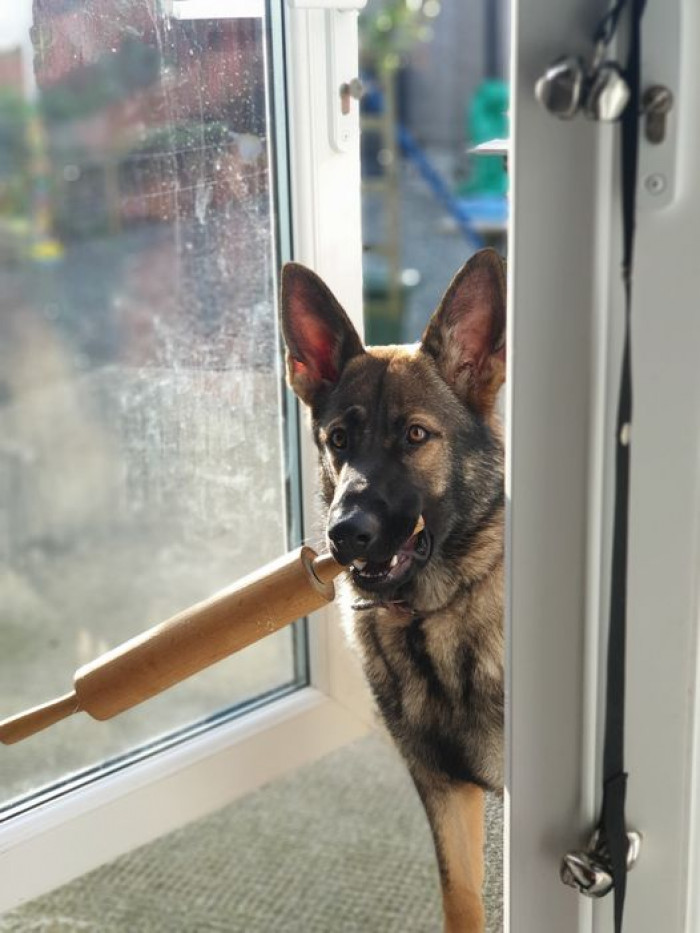 15. If you're lookin' for trouble, this is a sure-fire way to achieve it.

This is why I don’t work from home. #englishbulldog

16. Please! Do Not Forget! Important as HECK! 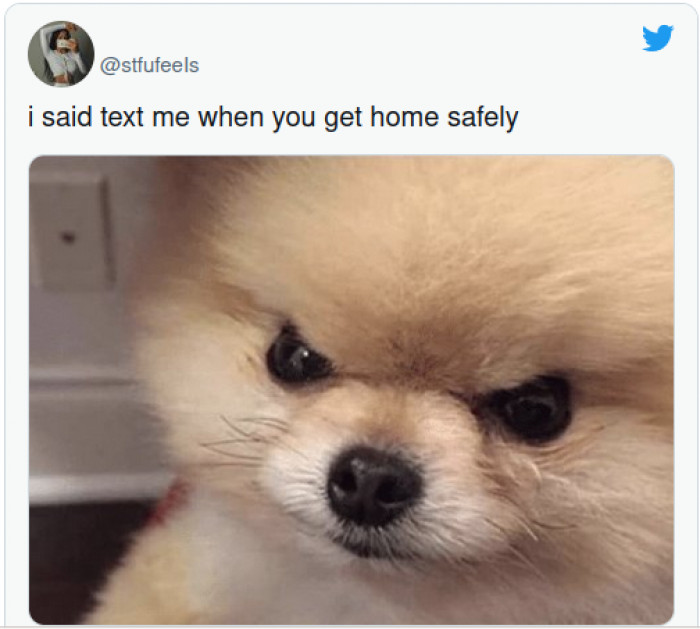 17. I bet it was one of his favorites for the whole day. 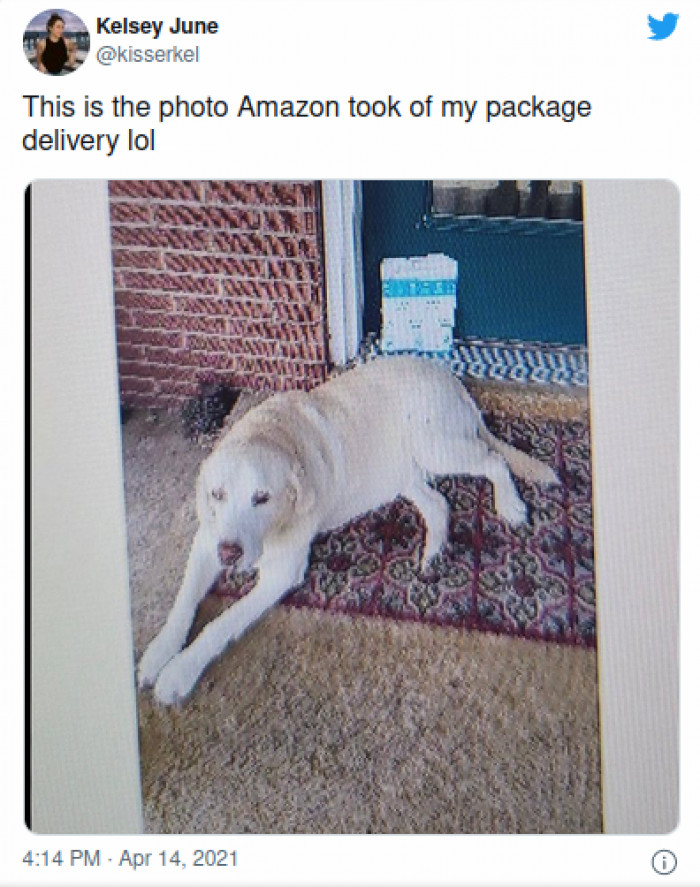 Thankfully, the ASPCA also has positive statistics to share, like how approximately 3.2 million shelter animals are adopted each year and that "about 710,000 animals who enter shelters as strays are returned to their owners (620,000 dogs and 90,000 cats)."

The ASPCA was founded "on the belief that animals are entitled to kind and respectful treatment at the hands of humans and must be protected under the law." The ASPCA’s mission, as stated by founder Henry Bergh in 1866, is “to provide effective means for the prevention of cruelty to animals throughout the United States.”

18. "A very scary apparition appeared in my apartment!" 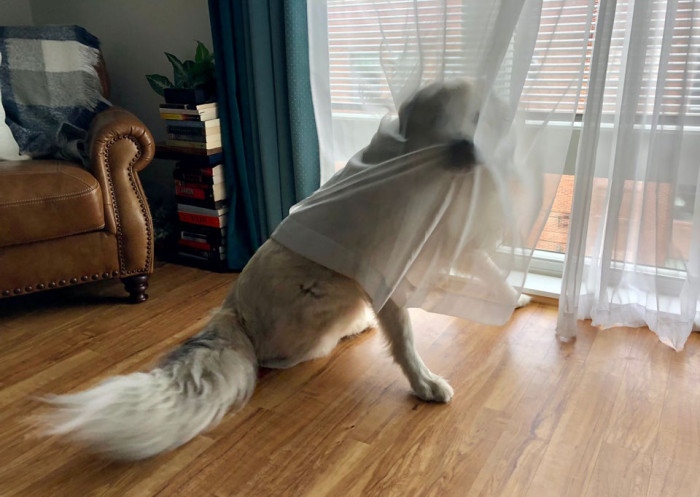 21. This adorable picture could be a poster for pet adoption, honestly. 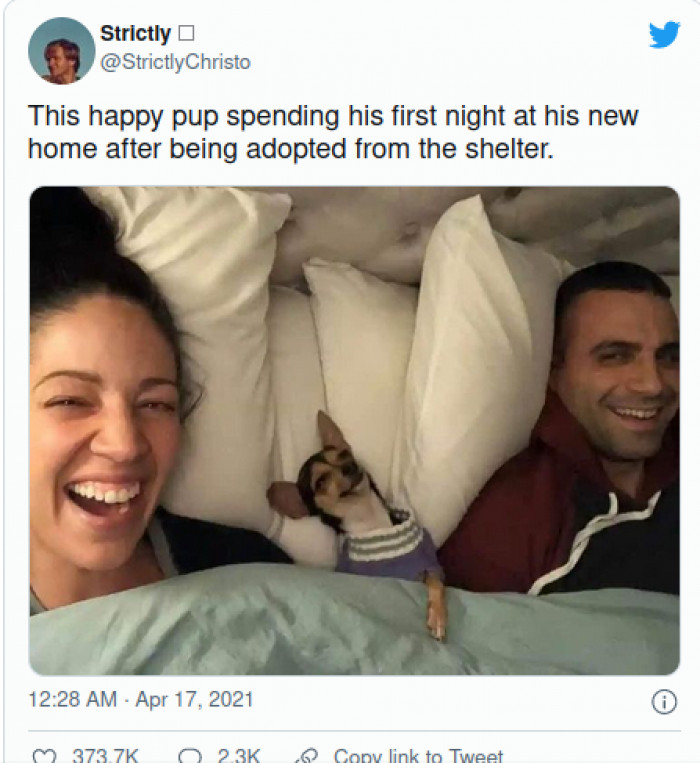 22. Bless Prancer and his absolutely hysterical journey to adoption (he has been successfully adopted and is living his best life now.)

This is the best thing I’ve read in awhile. pic.twitter.com/rdn3X6GeWH

23. Without a doubt, this is precisely the sort of joy this world needs more of.