Tumblr Users Are Sharing Their Views On Fur Vs. Vegan Options And Their Arguments Really Make Sense

Because of the new public views on animal treatment, many fashion brands stopped using fur and leather. Gucci, Tommy Hilfiger, and Michael Kors are just a few of them. The recent rise in the anti-fur movement indicates that more and more people are worried about animal rights and the environmental impact of using materials sourced from animals.

The fashion industry is now moving towards more conscious, ecological, and animal-friendly products. But the debate on fur vs. vegan clothes didn't stop.

This topic is still very controversial. Not so long ago, people started a Tumblr thread to share their views on whether wearing leather and fur wardrobe is truly so damaging to animals and the natural environment and if vegan fashion is innocent and animal-friendly as described by the supporters.

The Tumblr user teaboot opened the discussion: "I understand why people dislike leather and animal products." She then added that she still wears her mother's leather coat from 1989. People quickly joined in, stating some interesting reasons why they believe that animal and fur products might be, in fact, better than vegan apparel.

A Tumblr thread supporting fur and animal clothes against vegan apparel gives a lot to think about: 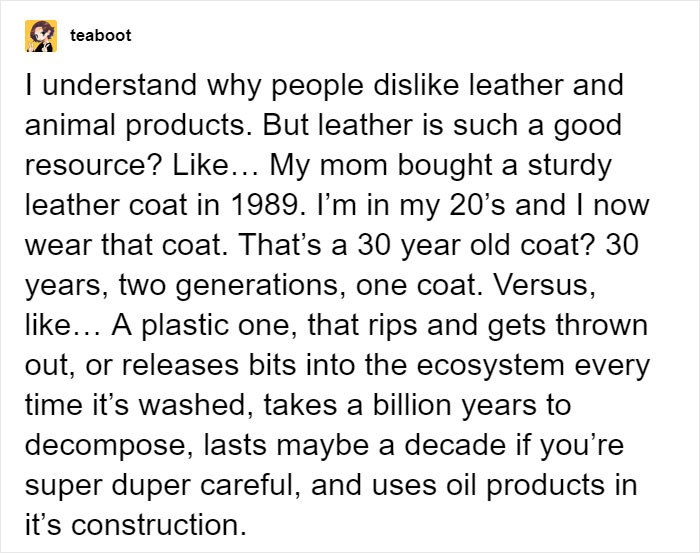 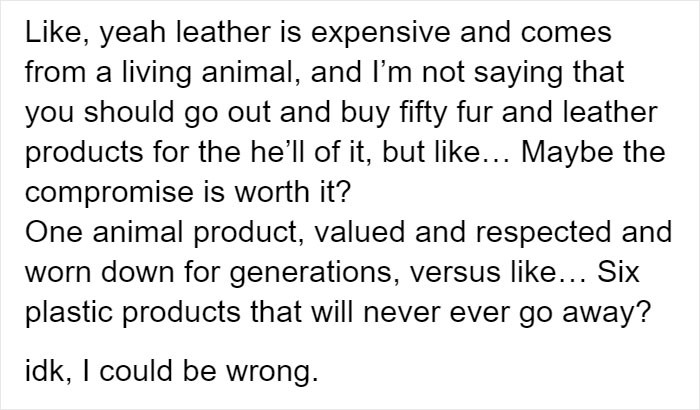 One user tried to debunk the belief that vegan fabrics are better than natural ones, arguing it’s just another type of plastic 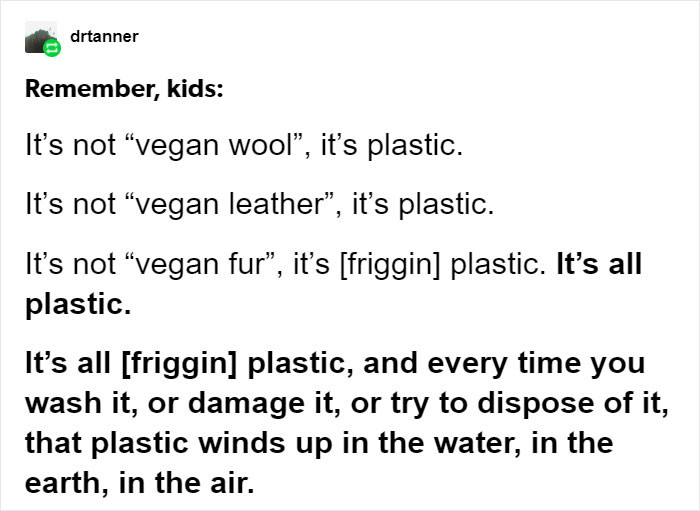 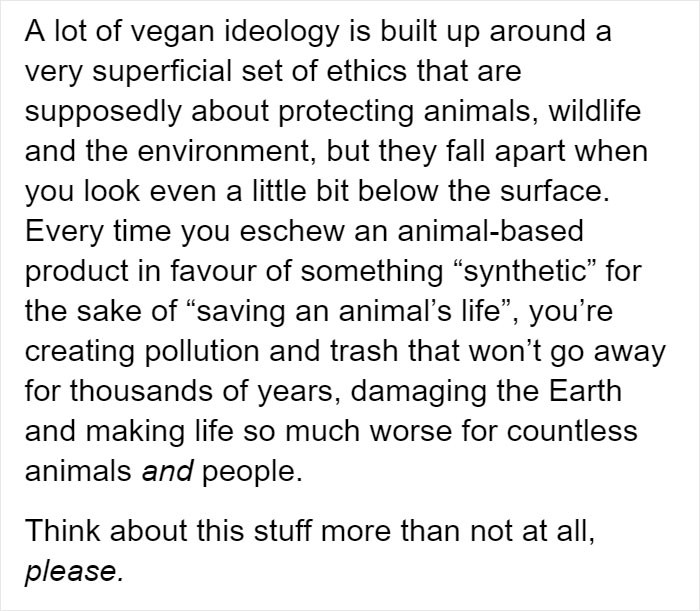 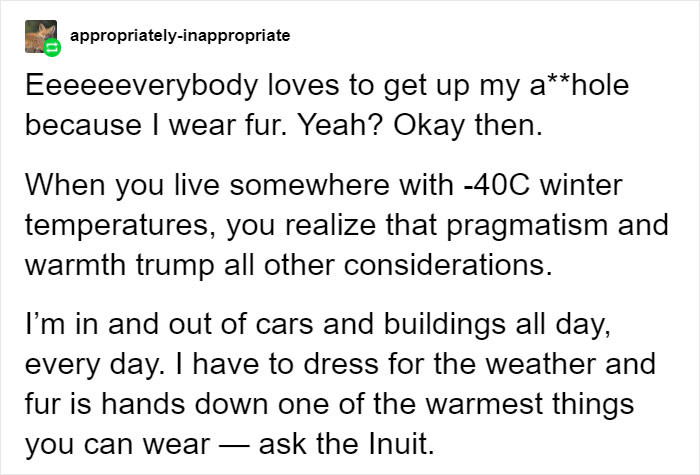 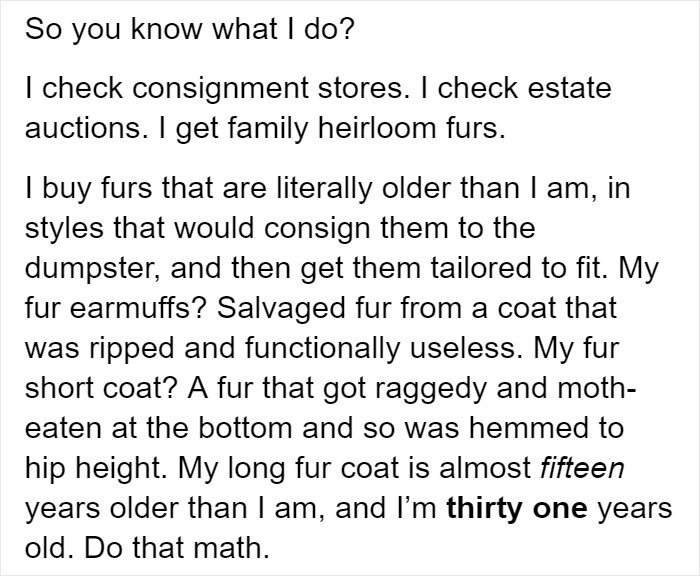 Vaida Baranove, a musician and dedicated environmentalist who commented in the thread, said: “Yes, vegans do not wear clothes or accessories that are made of animal-origin materials: leather, fur, silk, wool, velvet, etc.”

Still, “Since many of these materials are often more sustainable than their vegan alternatives (for example, a genuine leather jacket can easily provide warmth for more than one generation), we have to remember that vegans, just like other activists, need to choose their battles.” Vegans, Vaida clarified, always choose the fight for the animals.

This user explained why natural materials like cotton, hemp, and linen sometimes are just not good enough. 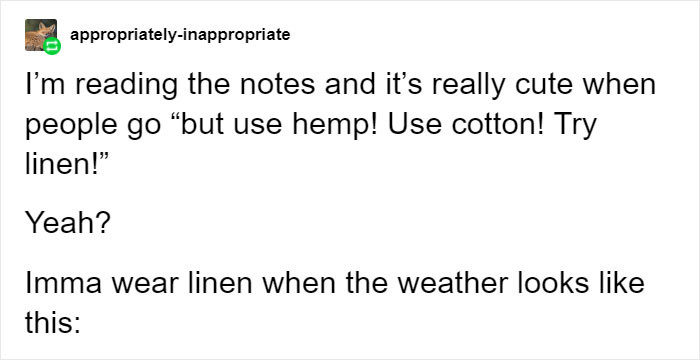 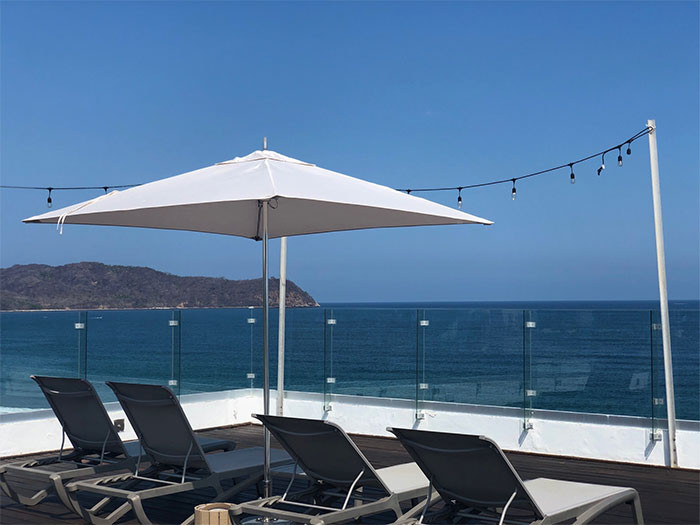 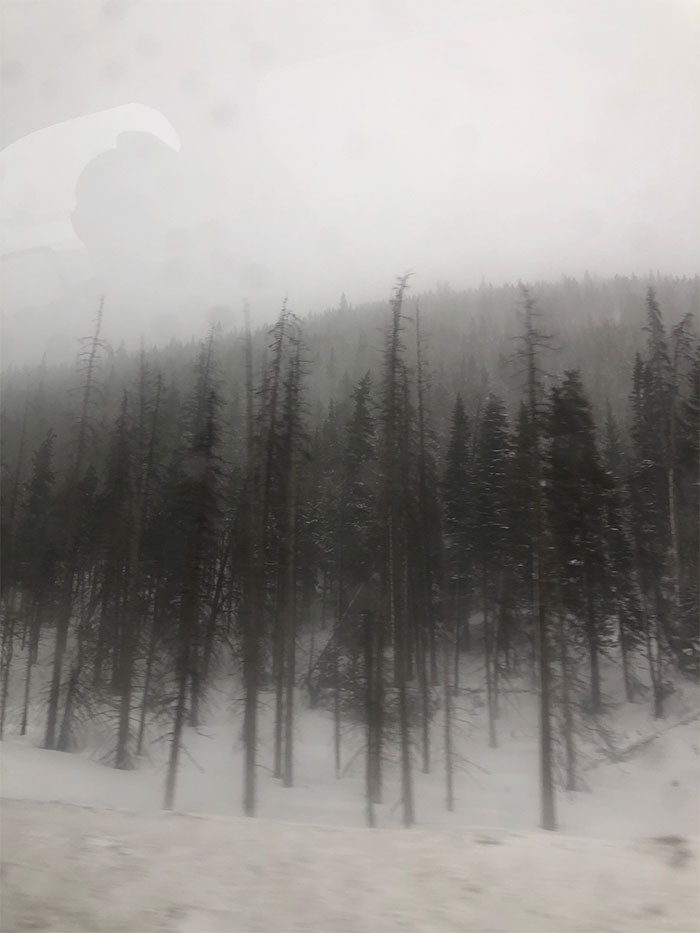 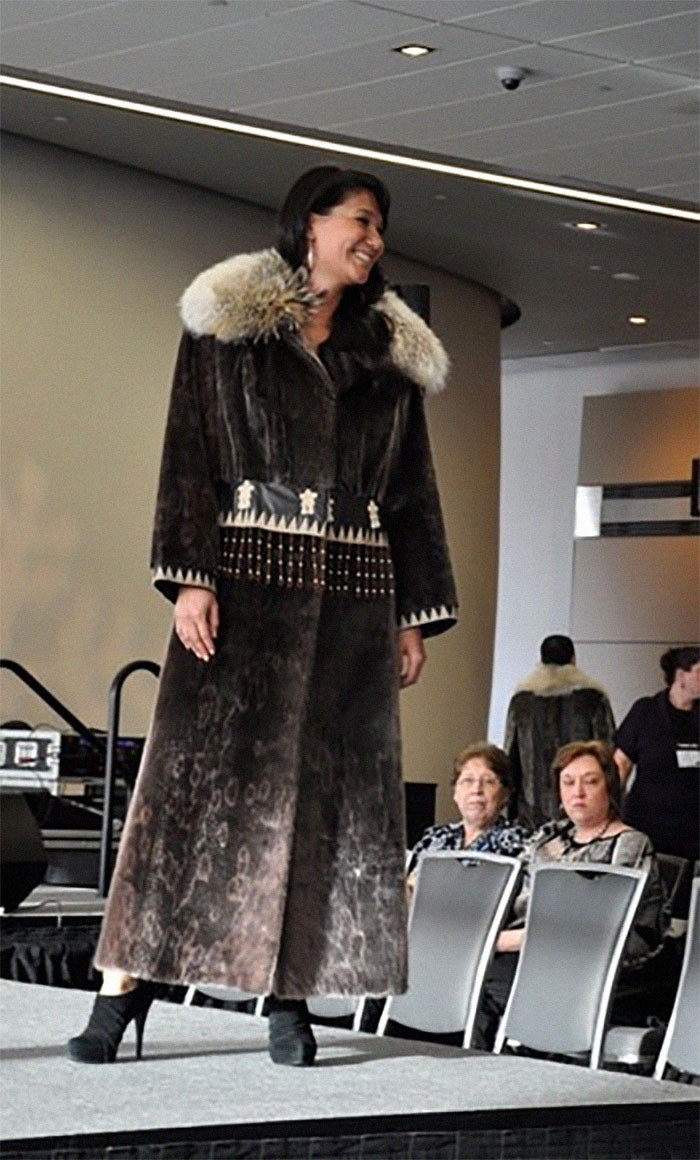 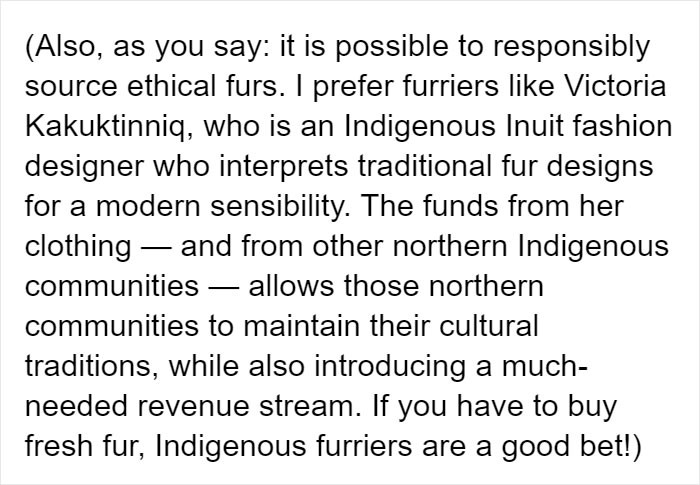 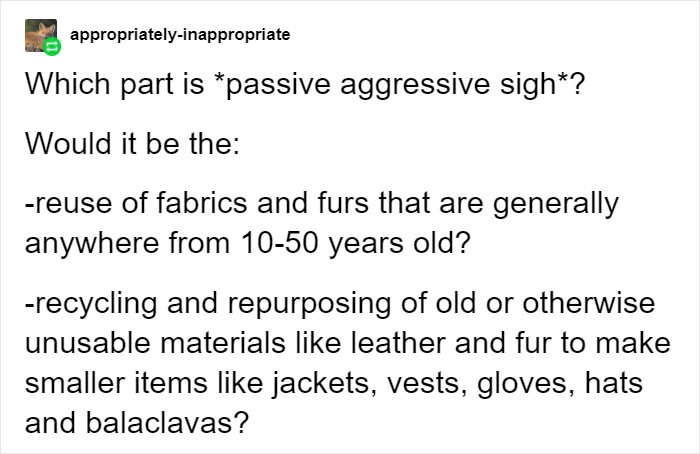 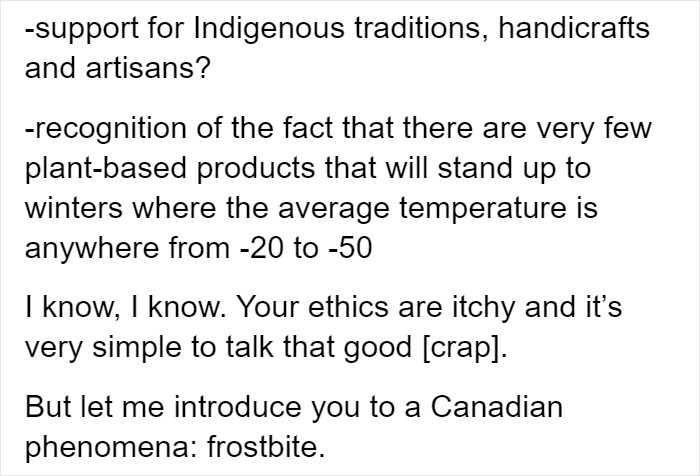 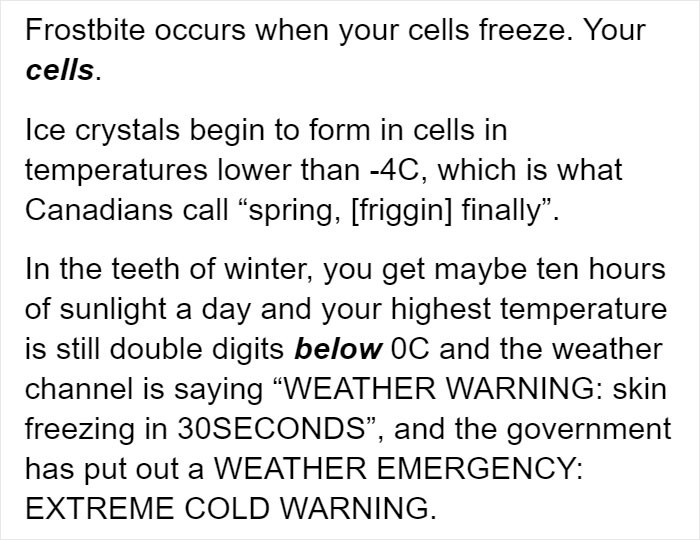 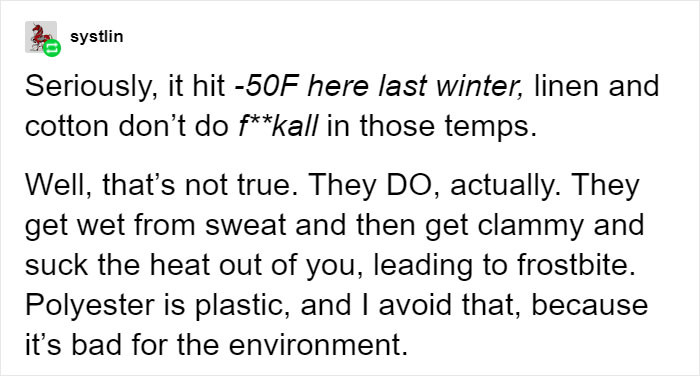 Cultural contexts make things more complicated. “Yet, as a vegan, would I ask someone living in the Arctic to wear a teddy coat or a puffer jacket instead of their fur one? Definitely not. Why on Earth would I come after someone who‘s already struggling to survive in such harsh conditions?”

Vaida then said that as a vegan, she invites her Western European friends to stop buying and wearing leather shoes. “Their comfort is not a good enough reason to kill a sentient being.” 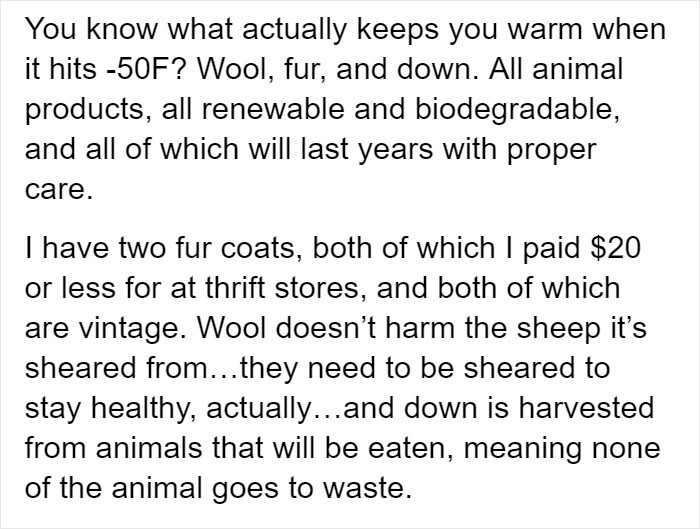 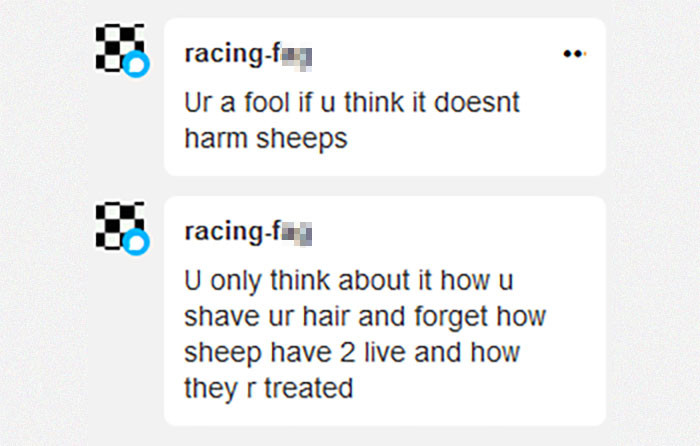 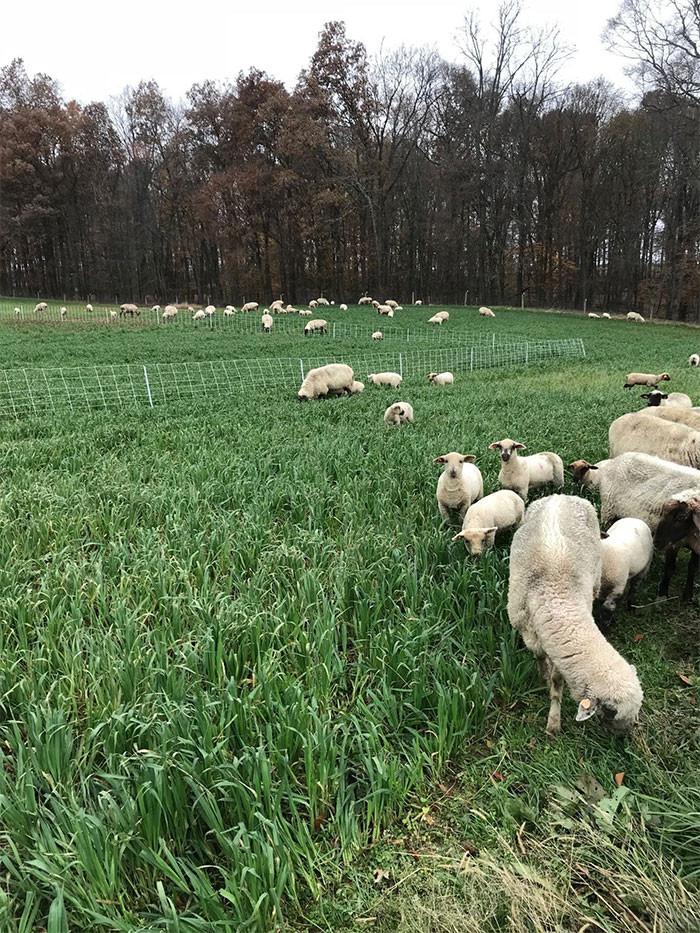 Veganism implies that you have to pay attention to all the materials that your clothing is made of. But, while cotton, seaweed, quality denim linen, hemp fabric, coconut fiber, etc., may be good options, they are not the best choice for harsh climates.

“There’s also rPET, which stands for recycled polyethylene terephthalate or simply ‘recycled polyester’ aka recycled plastic bottles. Some fantastic warm parkas are made of this fabric,” Vaida stated.

She concluded that it’s all about “not giving into the temptation of buying a ton of fast fashion items that scream that they are now vegan.” You should buy smart, buy less, and take good care of your clothes.

Someone stated that sheep shearing is damaging, but this person responded with a video: 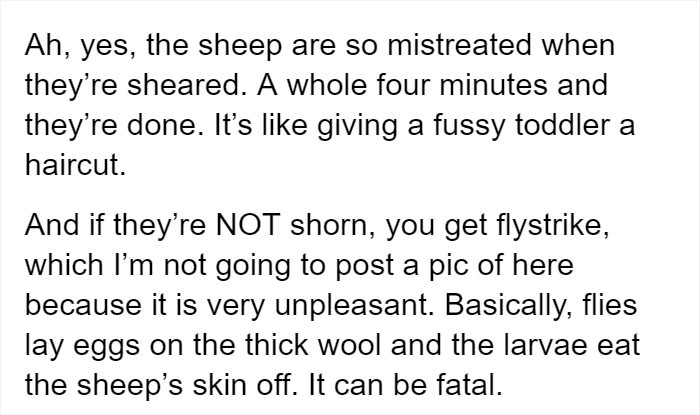