Finding quality daycare is a genuine struggle for many parents, especially because nannies are usually a subject of suspicion and mistrust. In fact, 4 out of 5 Americans (79%) would videotape a babysitter or pet sitter going about their duties inside the home, according to a survey by The Zebra.

Babysitting is one of the most mentally tasking jobs because of the prejudice attached to it and the enormous amount of pressure parents place on people who offer this service—not forgetting that they have to juggle roles as friends, family members, and employees, all at the same time. However, snotty parents serve to add fuel to the fire.

Parents who are mean to their babysitters, or put unfair demands on them, just make this job more exhausting. Some entitled parents have extremely high expectations and no regard for those who provide this service, posting blatantly bratty requests on babysitting websites.

How about we abandon this panorama and show you some of the worst nanny job offers on the Internet. The featured posts have been compiled from the "Choosing Beggars" Reddit forum.

You're about to witness some of the most demanding babysitting requests imaginable. At best, these posts are incredibly annoying because of their lack of consideration for these wonderful service providers.

These posts are just downright delusional, from ludicrous requirements to horrible rates like a $3/hr pay for an experienced nanny with a college degree.

1. If you're not in college, don't bother applying. It gets worse... 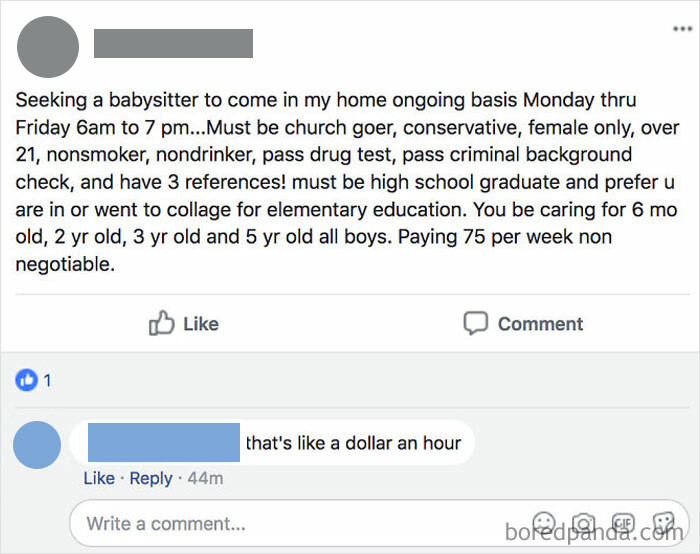 2. This is a jackpot, but mom wants something cheaper than cheap.

3. What kind of human is this? 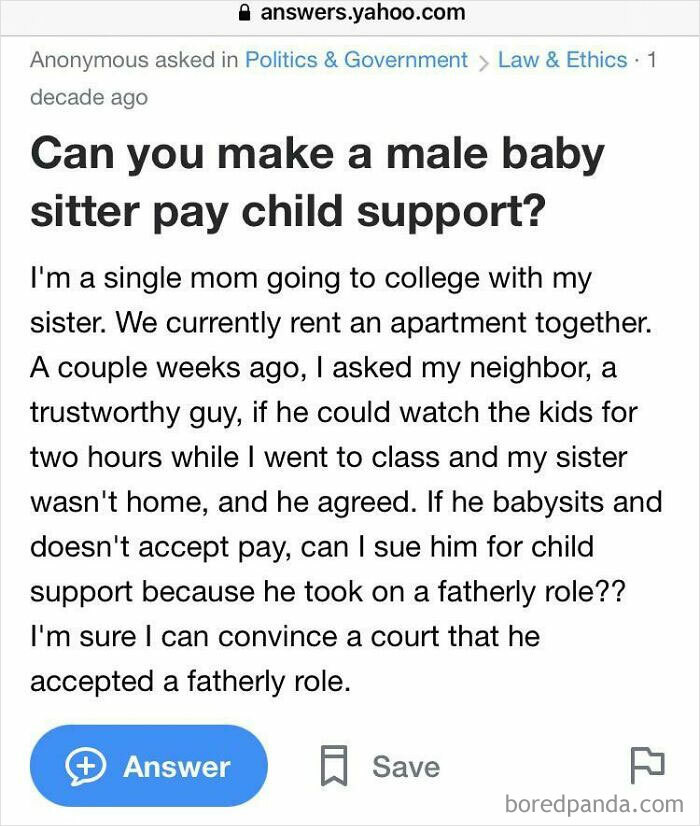 If you are looking for your first babysitter, you are likely experiencing feelings of responsibility and nervous anticipation. It's perfectly normal because this is someone who you will have to trust to cater to your child or children in your absence.

Also, while relatives and friends may appear to be the ideal babysitters for some, bringing in an outsider instead of a family member is a much more practical solution.

The problem isn't about placing your child in the care of someone you don't know but are confident in; it's the difficulty to find a trustworthy babysitter and keep that person as part of your family. However, there's no doubt that a lot of parents make the job hell for nannies. 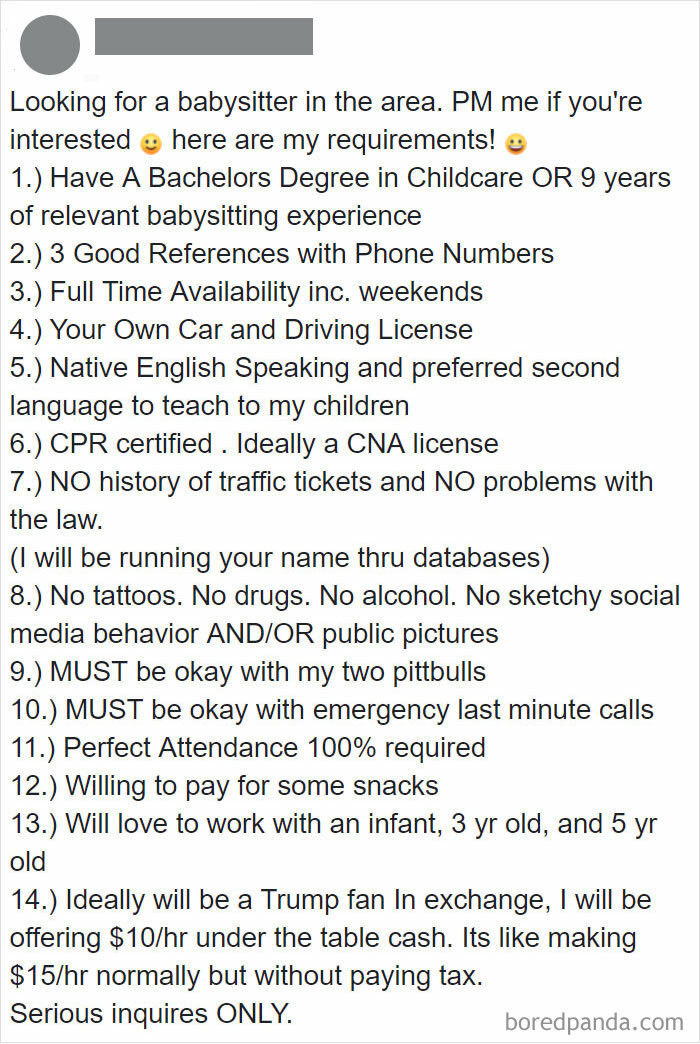 5. This parent is looking for a babysitter, but you'll have to do it for free. 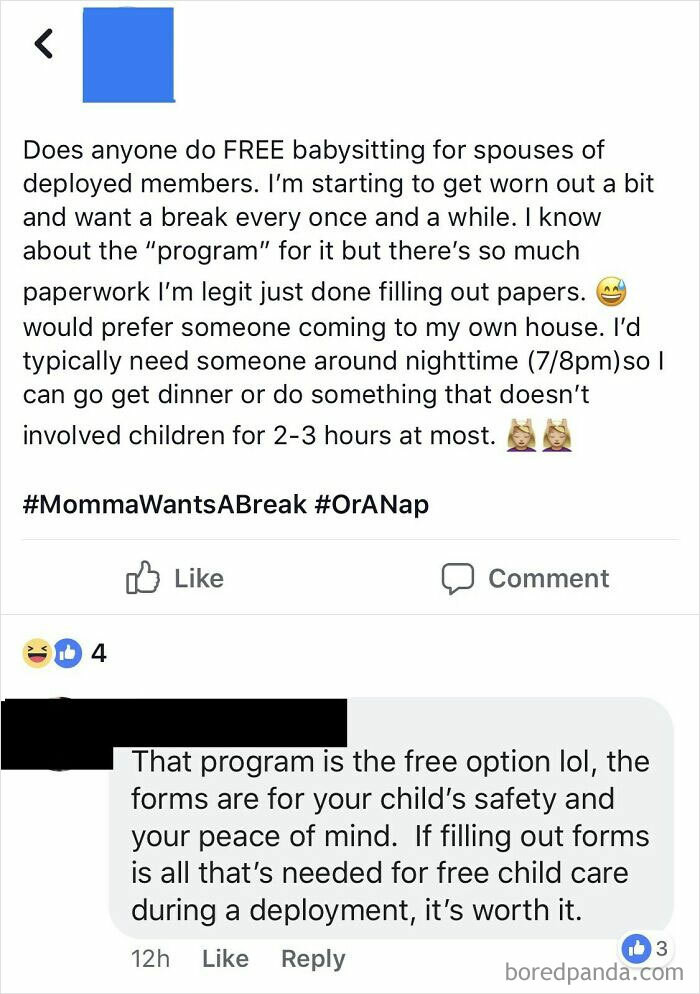 6. This is definitely not a nanny job. 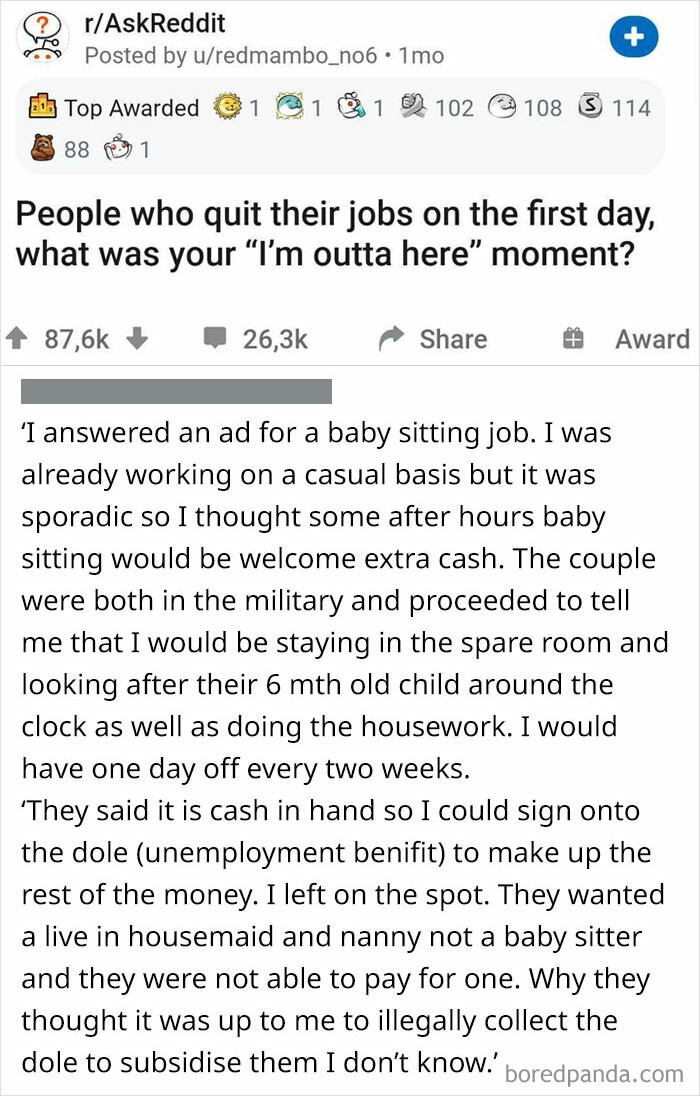 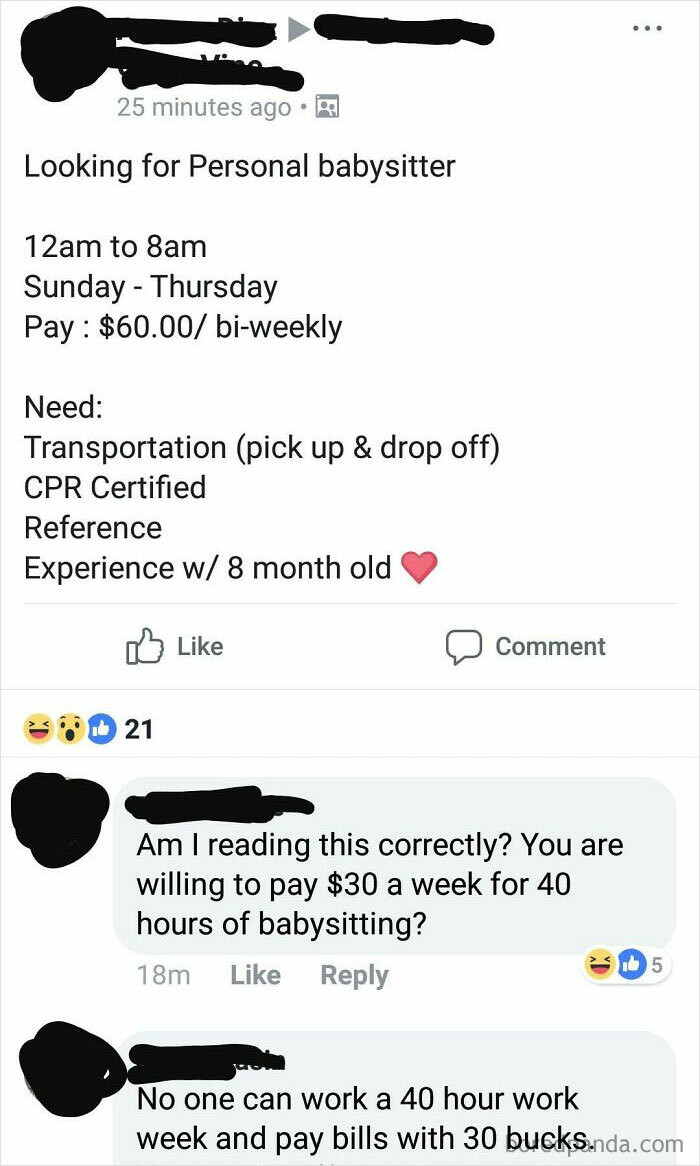 8. "I can't believe I have to pay for babysitting services...Ridiculous!" 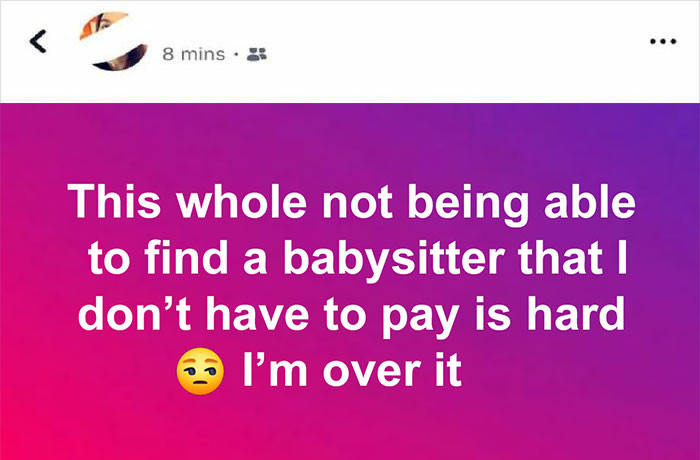 Even the tiniest details matter. A common faux pas is inviting youngsters from the neighborhood and not paying them.

Another common mistake is coming home late without any prior notice and not compensating them for overtime. It's also not uncommon for parents to want to compensate their babysitters with items or food instead of cash.

For a nanny, defining the payment terms from the get-go, whether it's the transfer date or the actual amount, is critical to avoid awkward situations later on.

9. This parent got furious that a babysitter charged $35/hr to cater for three kids.

11. "I wasn't aware payment was involved. You get free ice cream and a day of fun." 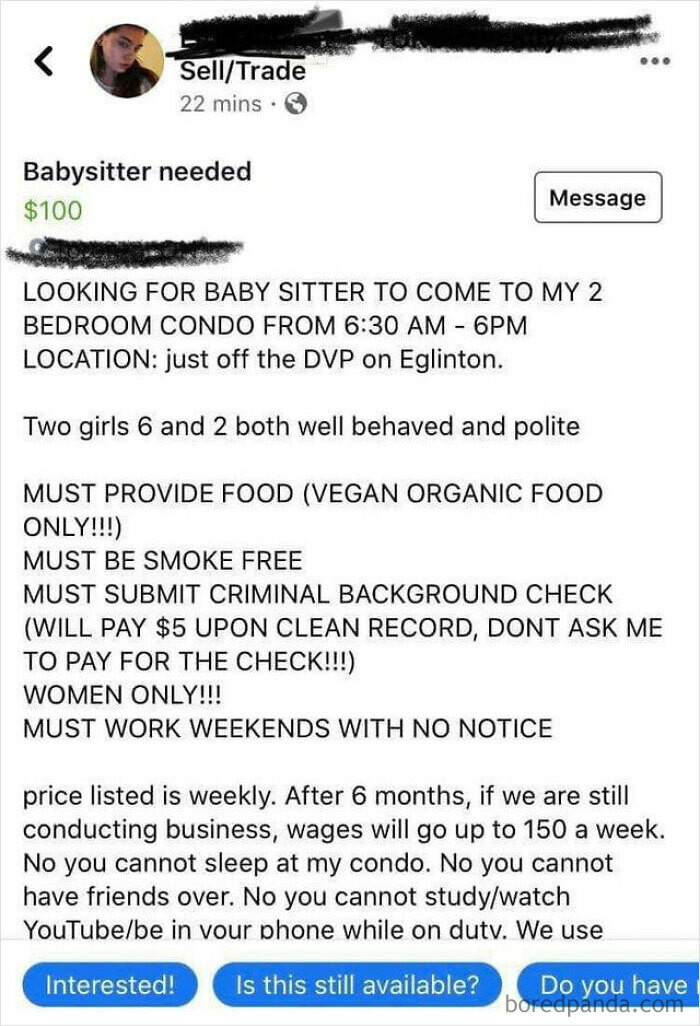 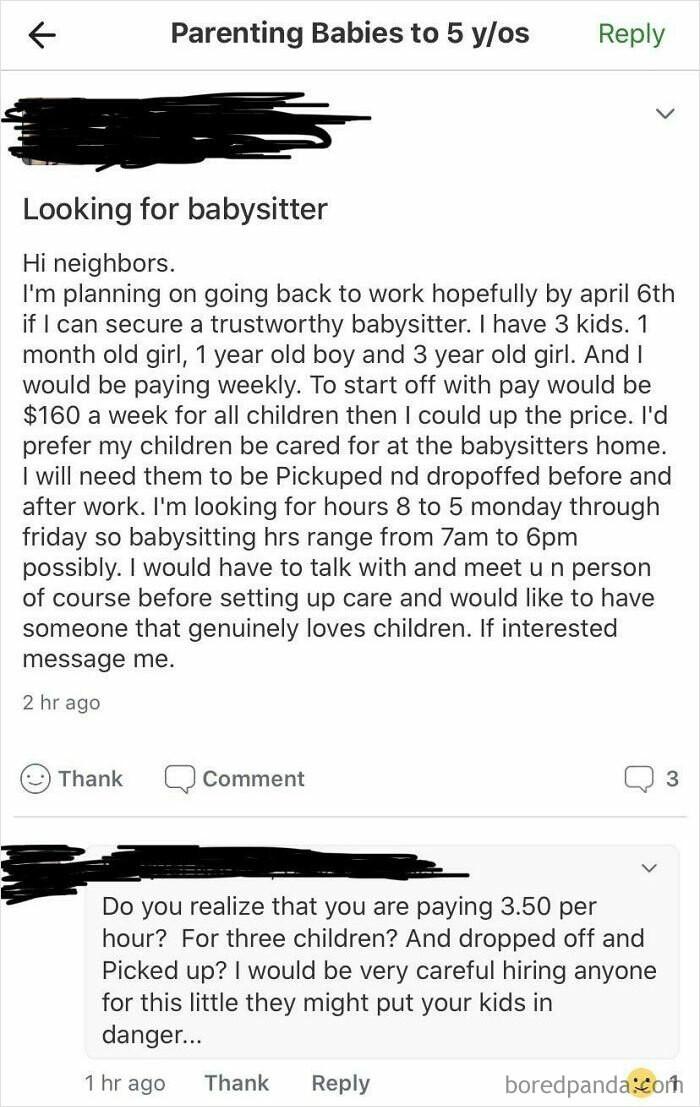 14. "Just be aware, you aren't being paid. Sometimes the baby cries constantly and throws up, so you'll have to deal with that..." 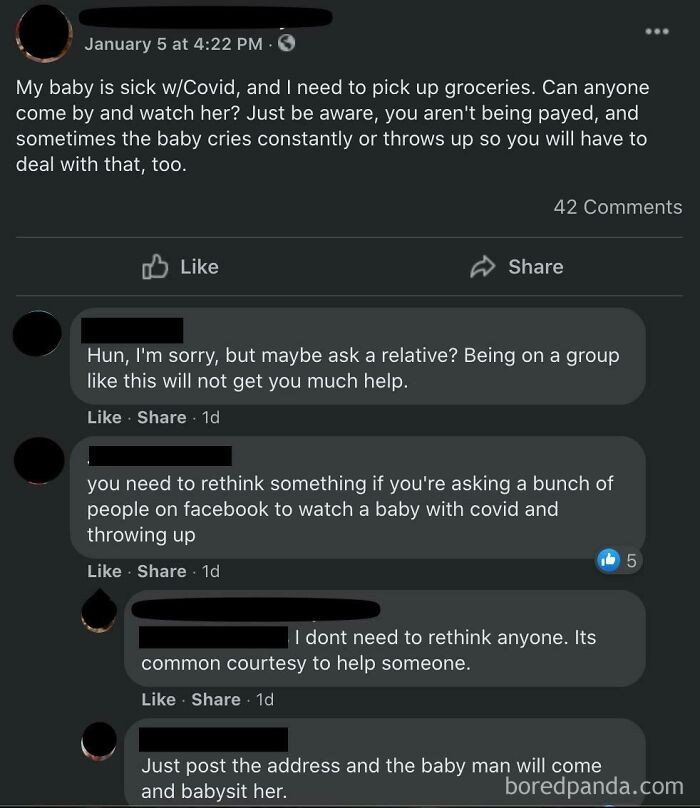 15. That moment when they think you're bad at math, but you stun them all. 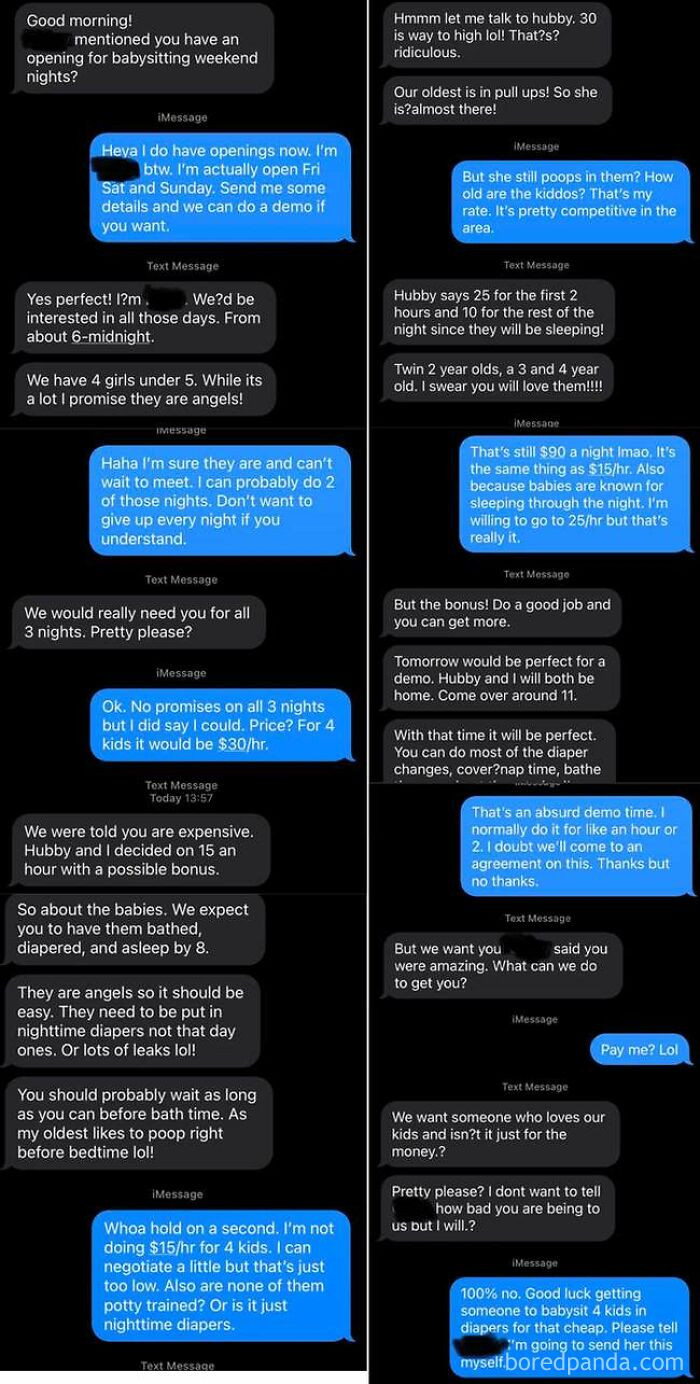 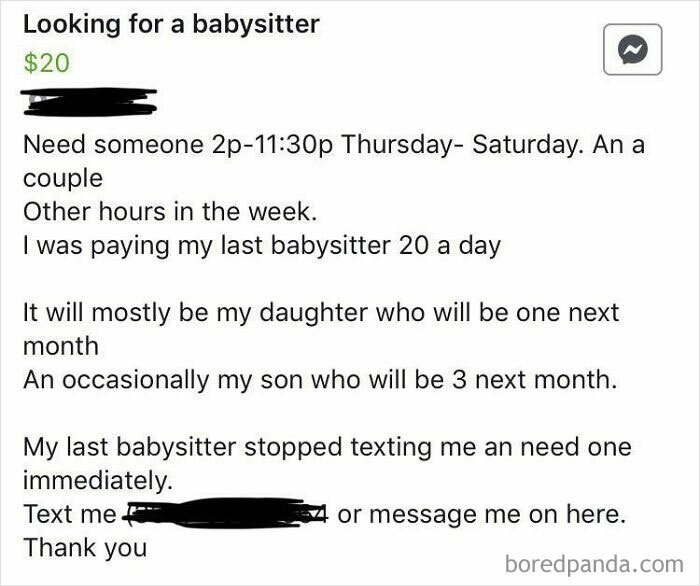 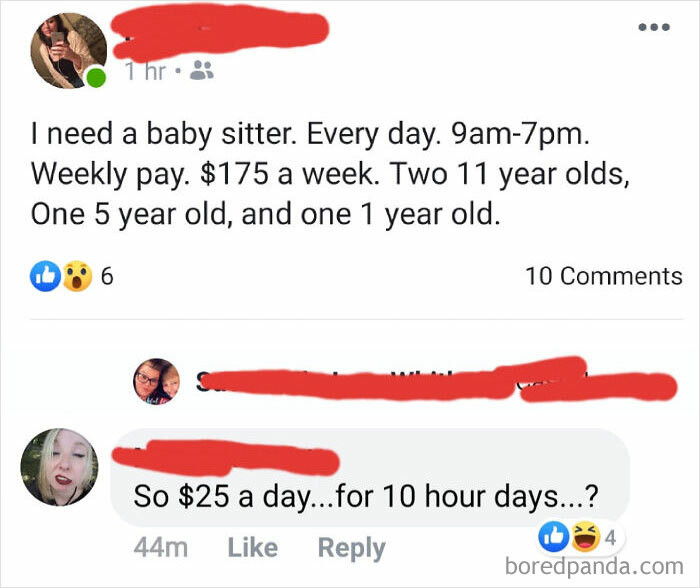 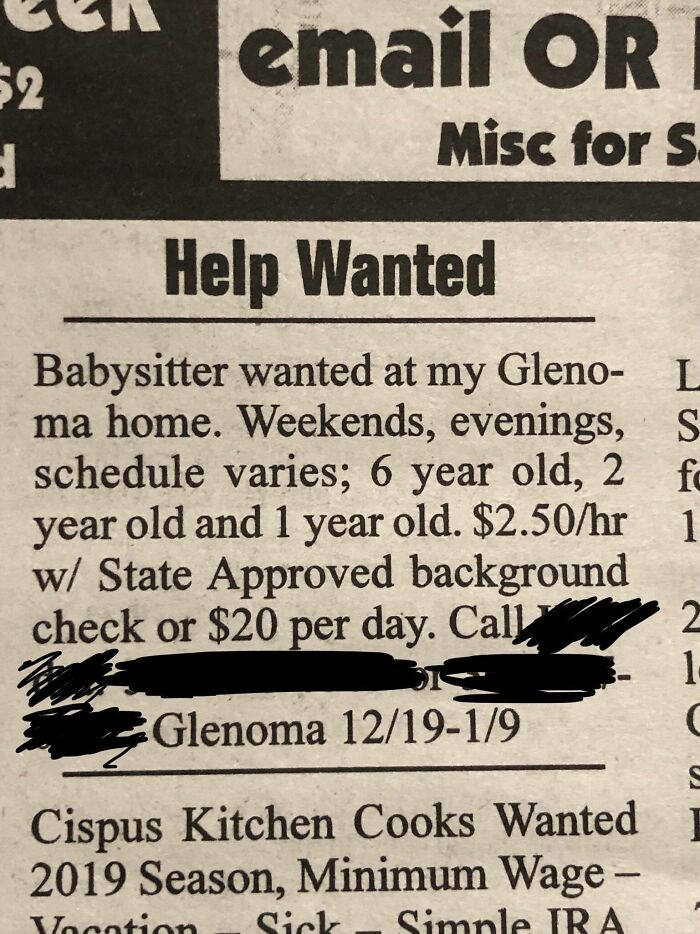 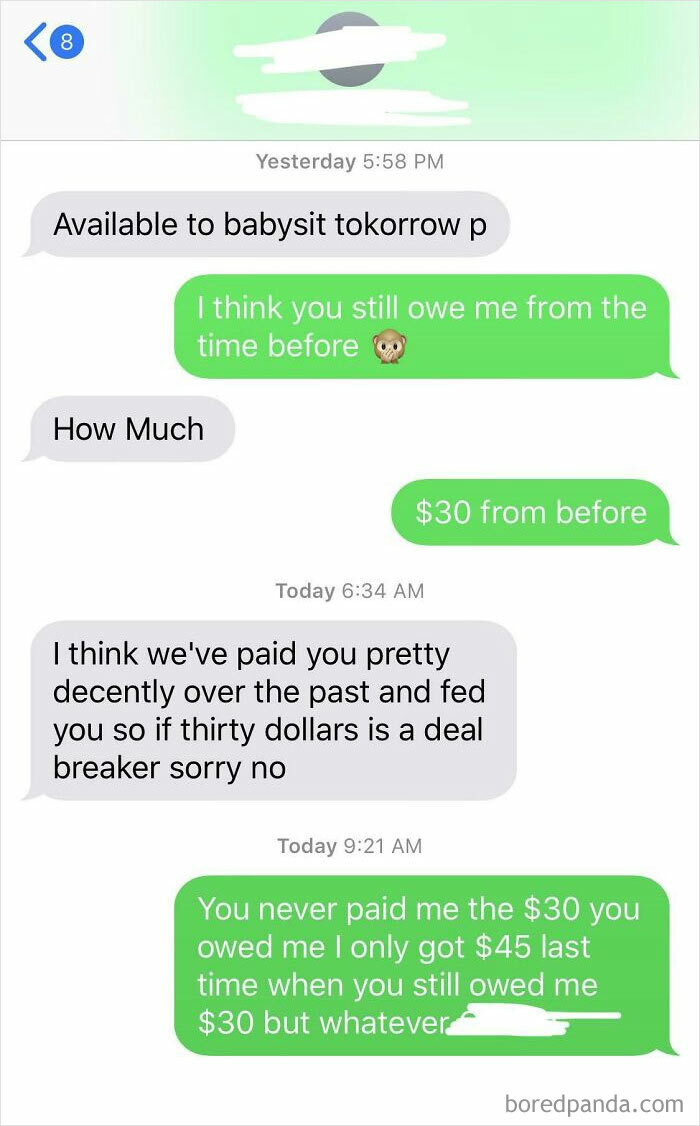 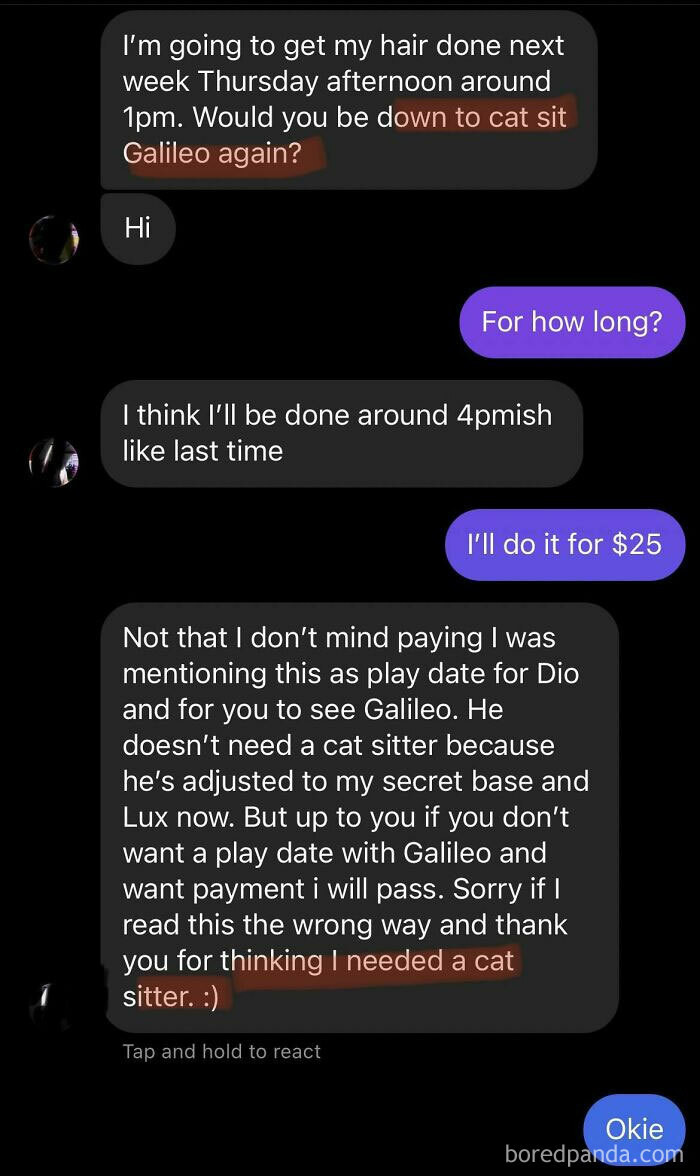 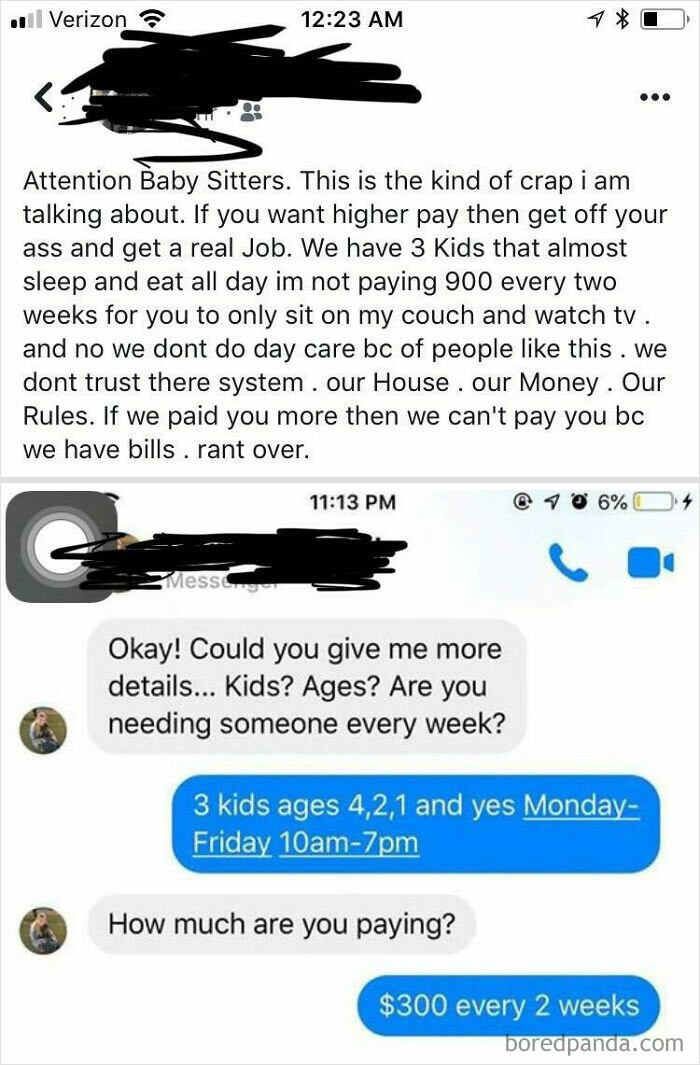 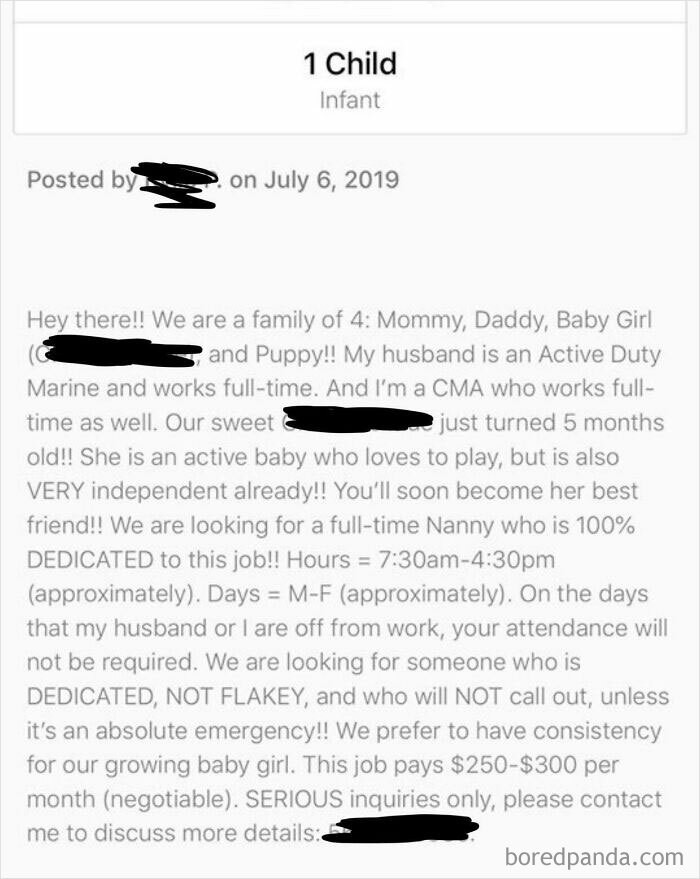 24. Bachelors degree or nothing. 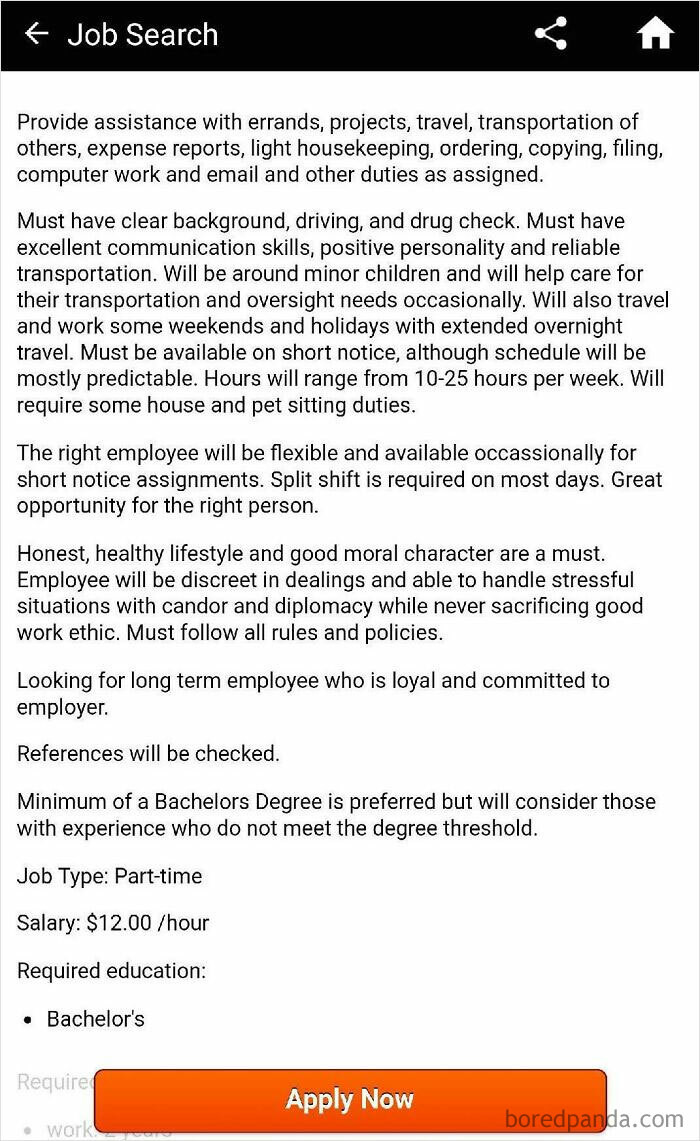 25. Single mom thinks that $10/hr is too much for a babysitter. According to her, "I have CPR-certified friends who will come for less." 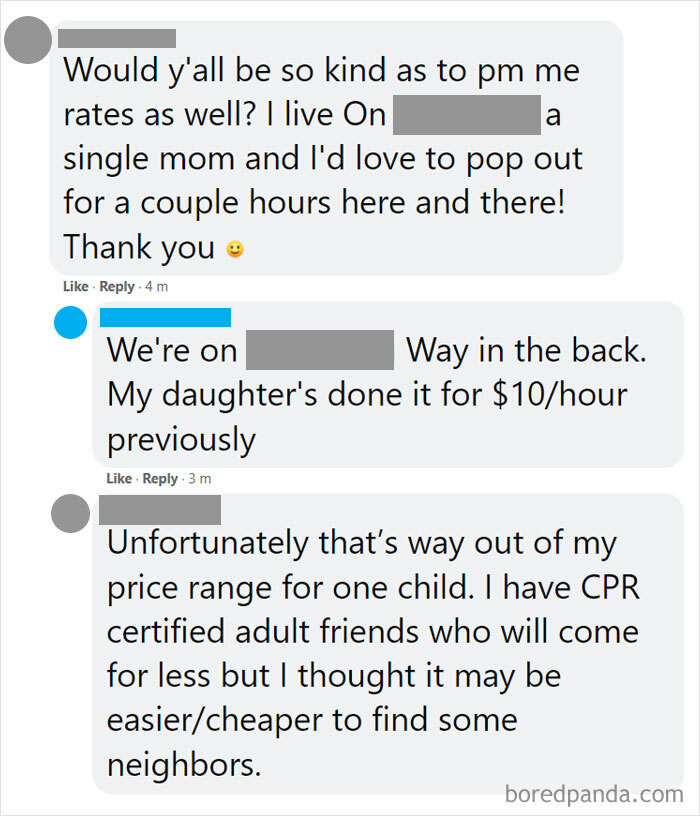 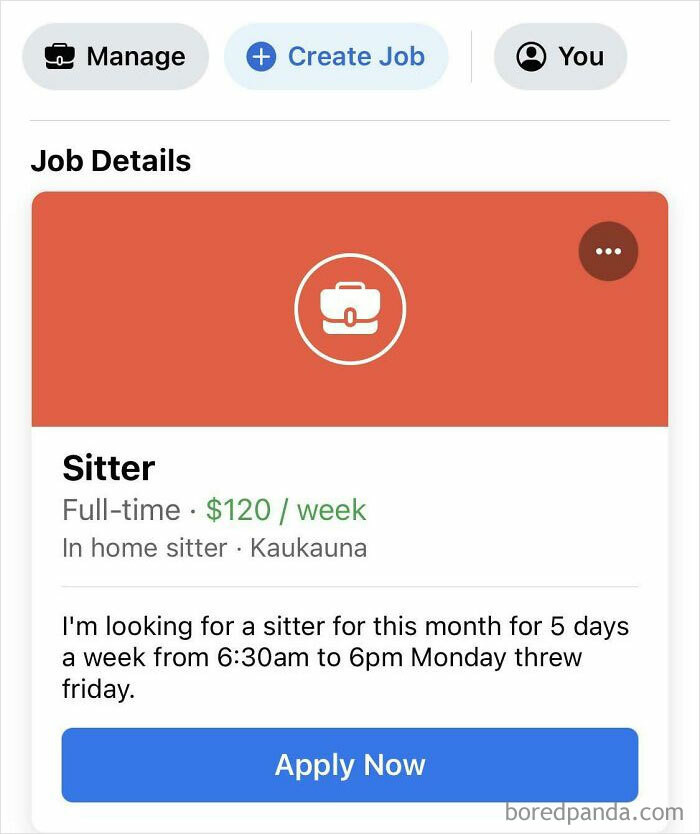 28. These requirements are ridiculous.

30. Requirements: You must be ready to pay my rent. 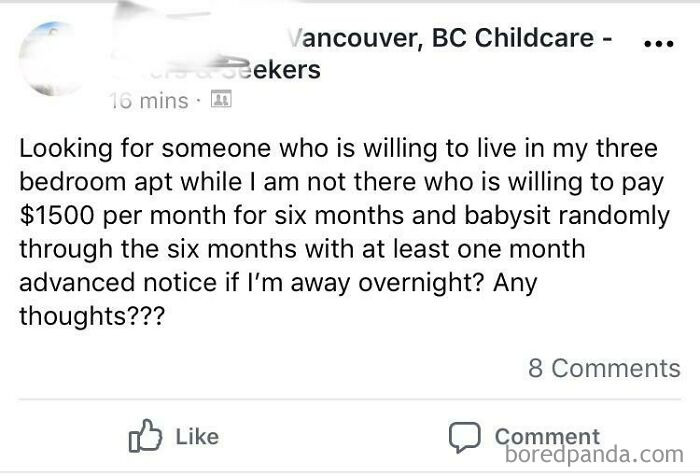 31. "The babysitter just sits on the couch and makes sure the kids don't get hurt...She's terrible." 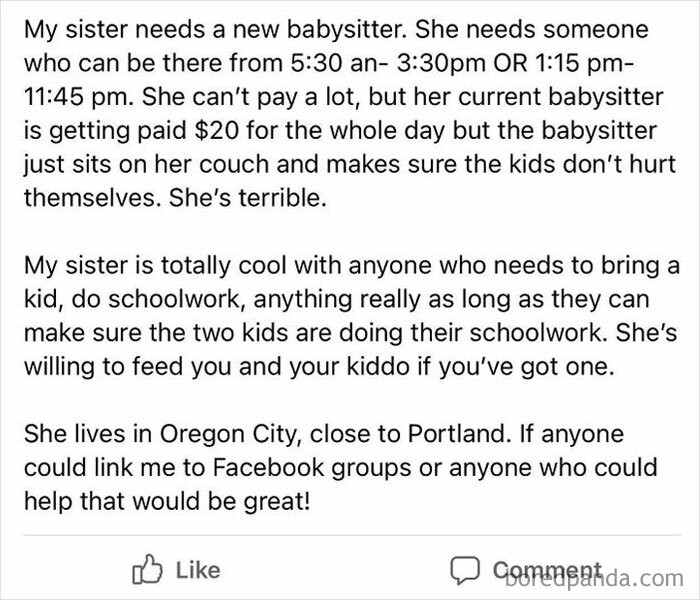 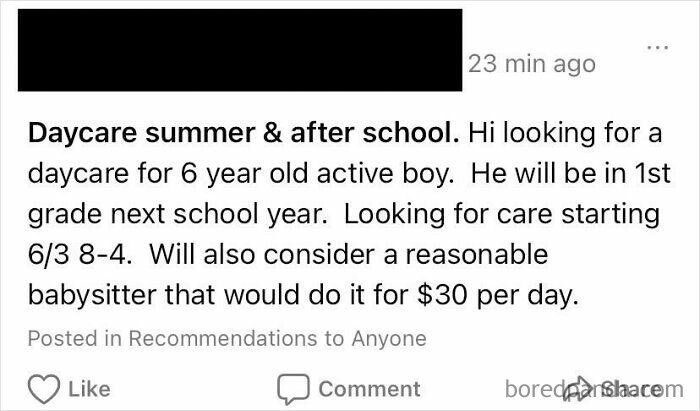 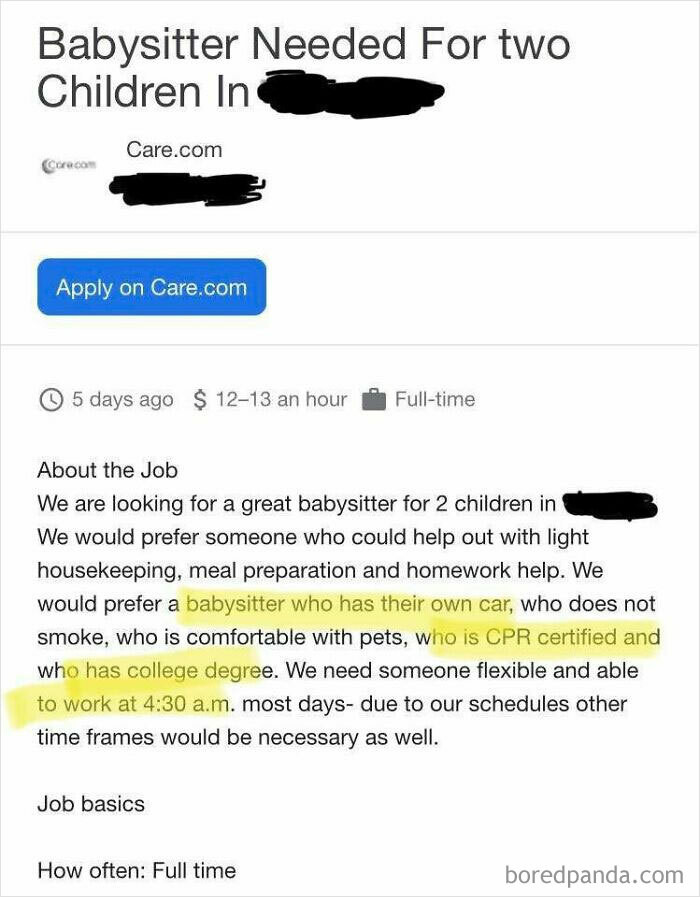 The Internet is full of overbearing job offers written by people who simply don't consider that they are dealing with humans, not robots.

People might have faced the worst day of their life but still, be willing to offer their time for a service if it's well-paid and something they enjoy doing.

So everyone should try to show a little more respect for their potential nannies and realize that they get paid because someone decided to trust them with their most prized possessions.