A Tiktok User Shared A Pre-Date Google Form Sent To Her By Her Current Boyfriend Before Their First Date, And People Were Amazed At The Creativity

Dating life can be exceptionally tiring, especially nowadays. Over the last couple of years, individuals have become emotionally free and have ended up floating away from the dating scene.

Sometimes, it almost appears as though being single would be the ideal thing, but the couples that you see through those restaurant windows make you remember the opposite. Still, finding someone who will walk alongside you regardless is always a challenge, as it is like riding a faulty roller-coaster of overwhelming feelings where there is a tremendous chance of falling down.

Imagine how many times people have to look through Hinge or scroll through Tinder to find a good ally to talk with! It’s honestly tiring! Some people might even argue that dating was a lot simpler back then, as there was no technology and things were somewhat more romantic.

Assuming we cannot find the perfect person for ourselves in this day and age with all the technological inventions for talking to anybody around the globe, then we can also imagine what it was presumably like to attempt to date in a town without having the option to open an application on your mobile phone and do other things.

Now to this interesting story about a pre-date Google form that you'll surely love...

This TikToker shared how her now boyfriend requested that she complete a Google form on their first date, and her post went viral. 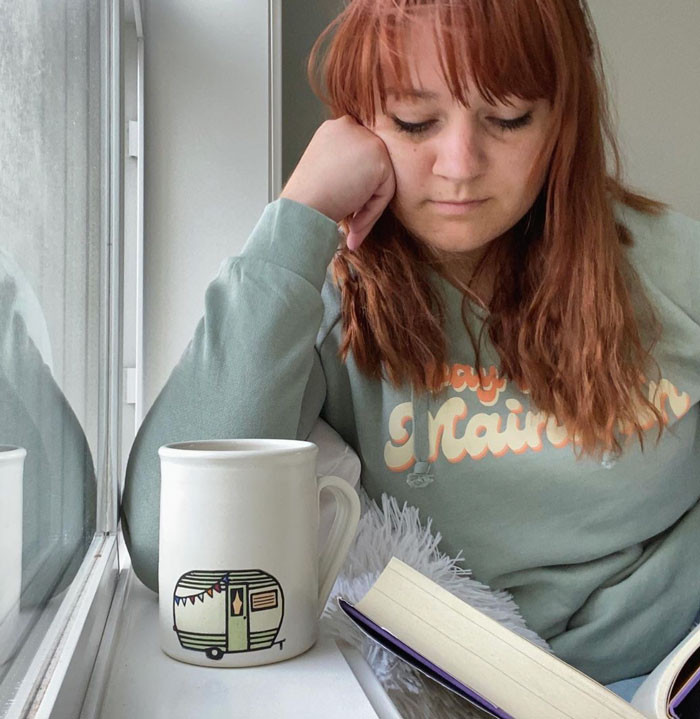 A TikTok user with the username @maytheeleven shared her amusing, yet lovable date story. Graham, who is the OP's date, requested that she fill out an extremely detailed Google form before going on a date.

The form had a lot of choices for activities, such as skating, hiking, and spending the evening with some ice cream on the seaside. Furthermore, there was an option to pick the meal for the night and the clothes as well.

To be more explicit, the first page of the Google form had a little message from the OPs' date saying, "Congratulations as you have agreed to go out on a date with Graham, and he guarantees a happy time with your choices in mind." Actually, Graham needed the OP to indicate whether or not she would be able to attend. 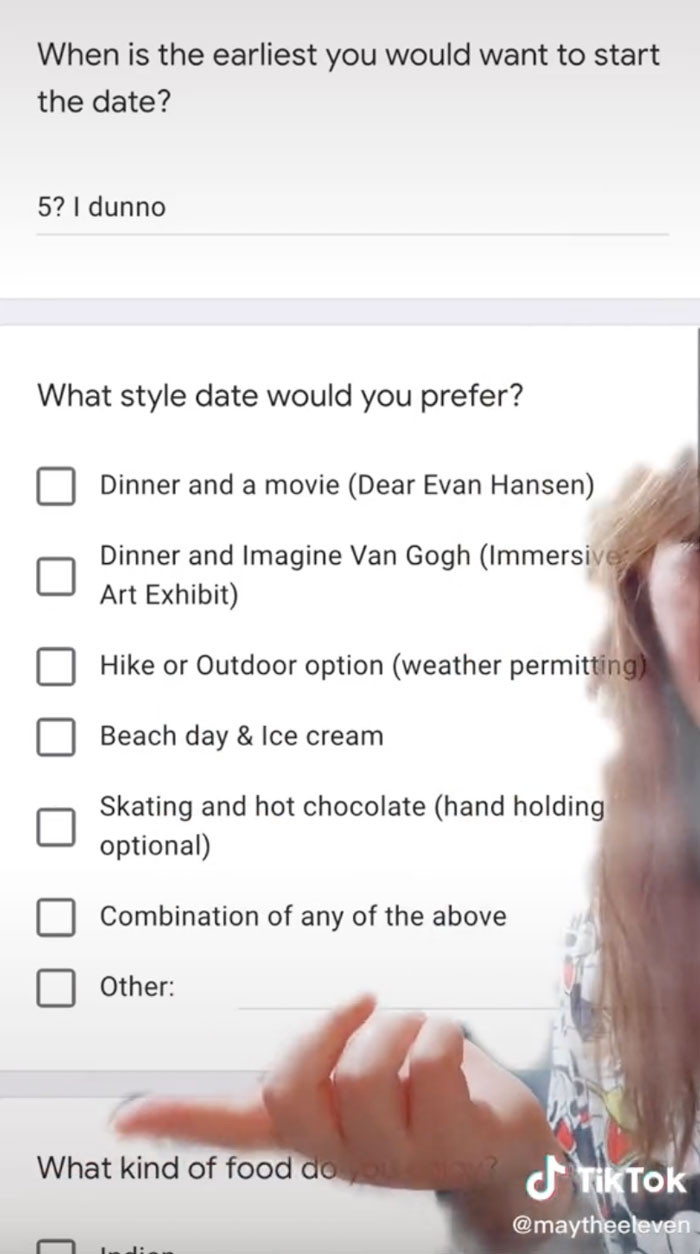 Graham was generally more creative and incorporated various options while also leaving room for ideas. This Google form could be exceptionally useful for individuals who are too far apart and for those who need to ensure that the two parties are enjoying their evening and not feeling awkward.

Dinner and a movie? 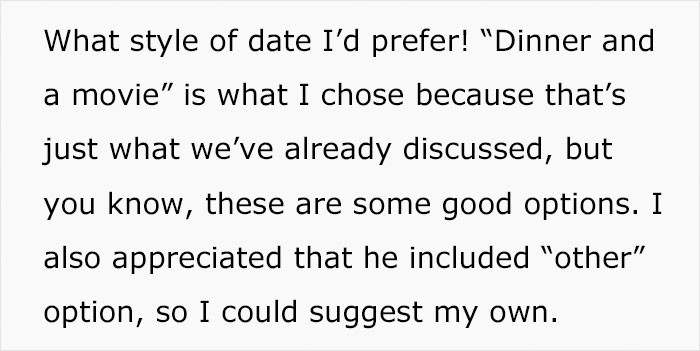 The following page was all about the meals that the OP might possibly enjoy, as the lady had five options to pick from and a suggestion field as well.

It's a big advantage to thoroughly know the plan for your day, especially if it's your first date. 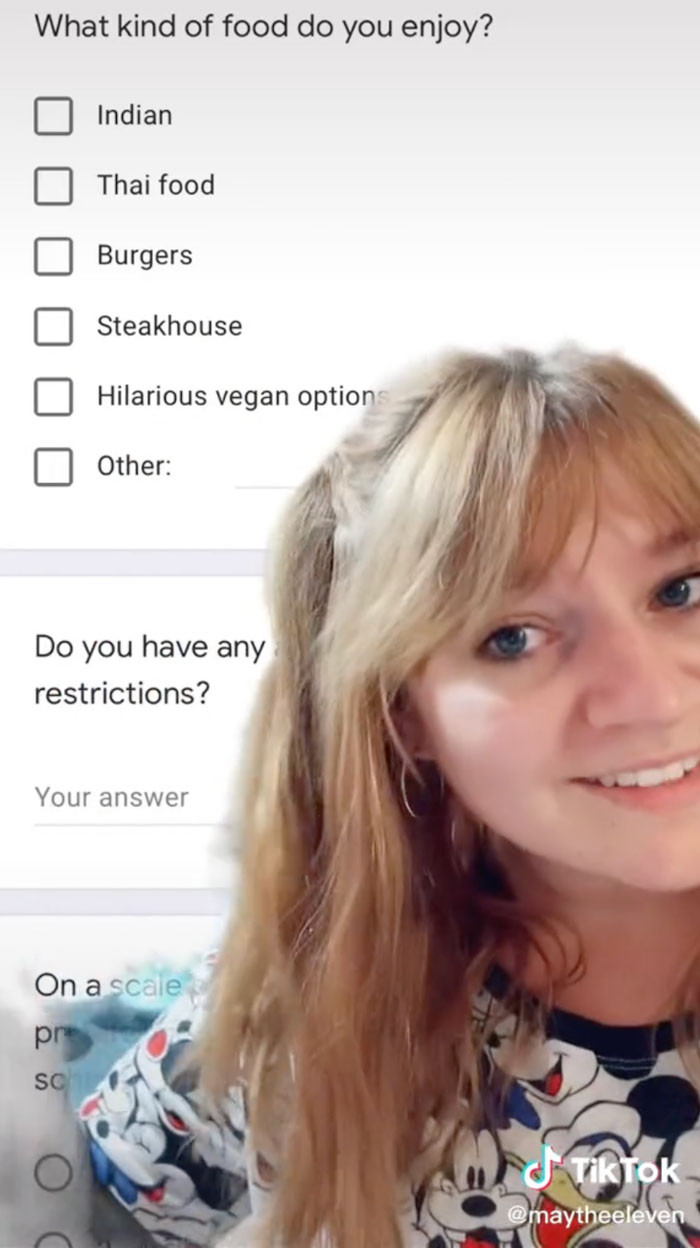 Graham additionally tried to dress appropriately, so he didn't falter in getting some information about her preferred style for the night. The lady concluded that wearing regular casual would be awesome for the date.

Nonetheless, she pointed out the fact that if she had chosen the suit and tie, which was the fifth option, he would have worn it without a doubt. 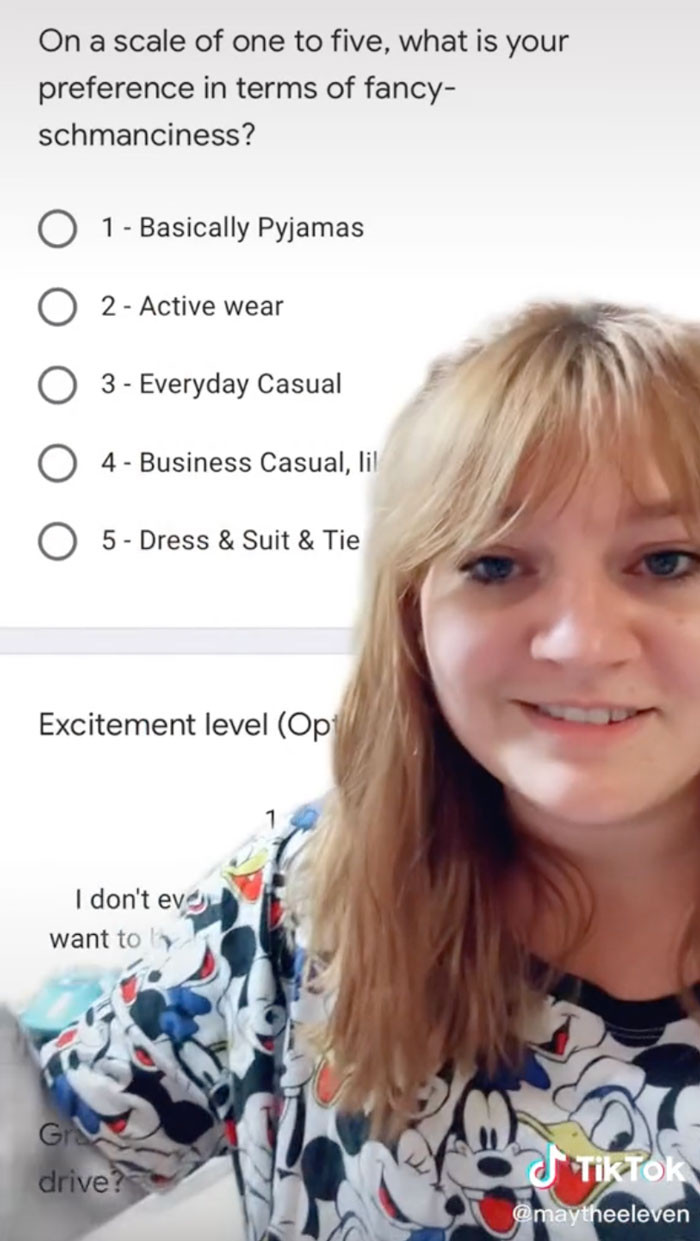 Just when we felt that things could not get any cuter, an exceptionally casual invitation for the date was sent to the OP while heading to Grahams City. 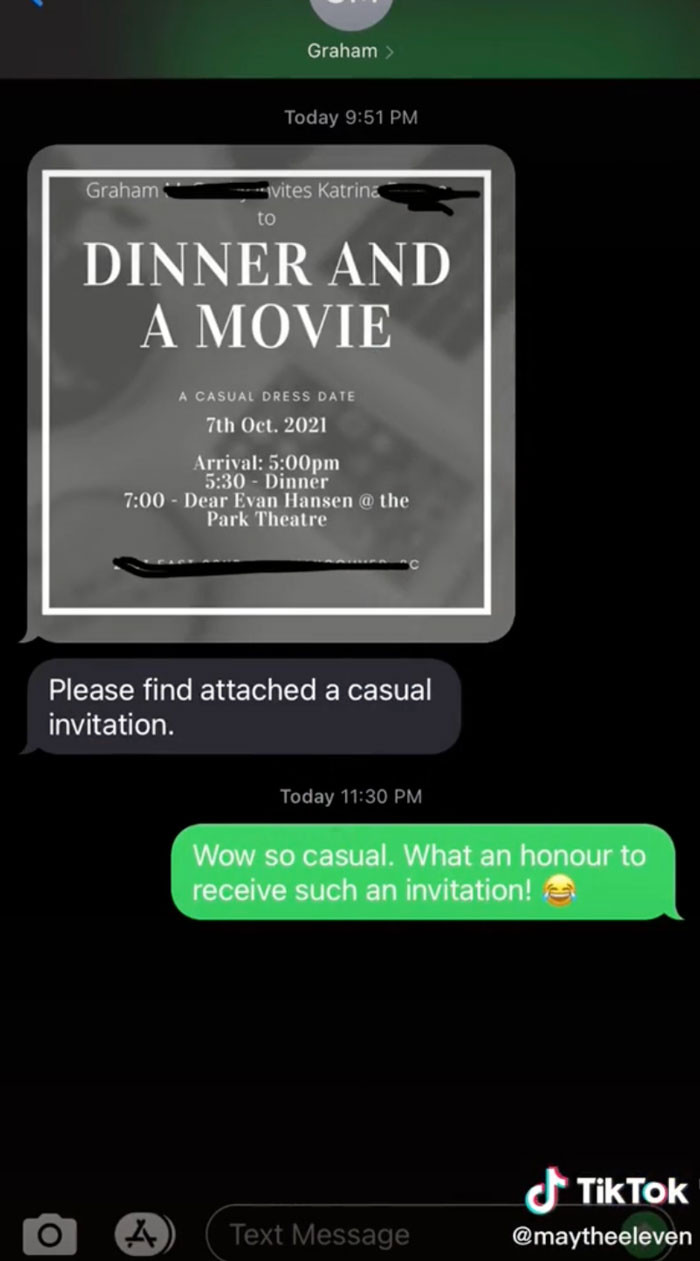 After everything, the OP said that the date was beautiful and that it went quite well! Indeed, Graham didn't settle down and made an exit form after the first date.

The first inquiry was for the OP to rate Graham's performance on a scale of "awkward" to "charming," and she picked a 4. This is not due to Graham fundamentally, but simply on the grounds that first dates tend to be quite inclined towards the awkward side.

Then, Graham went further to amaze everybody with his Google form. He listed random things that his date might have experienced.

The OP got an exit form that was just as fun as the first one after the main date. 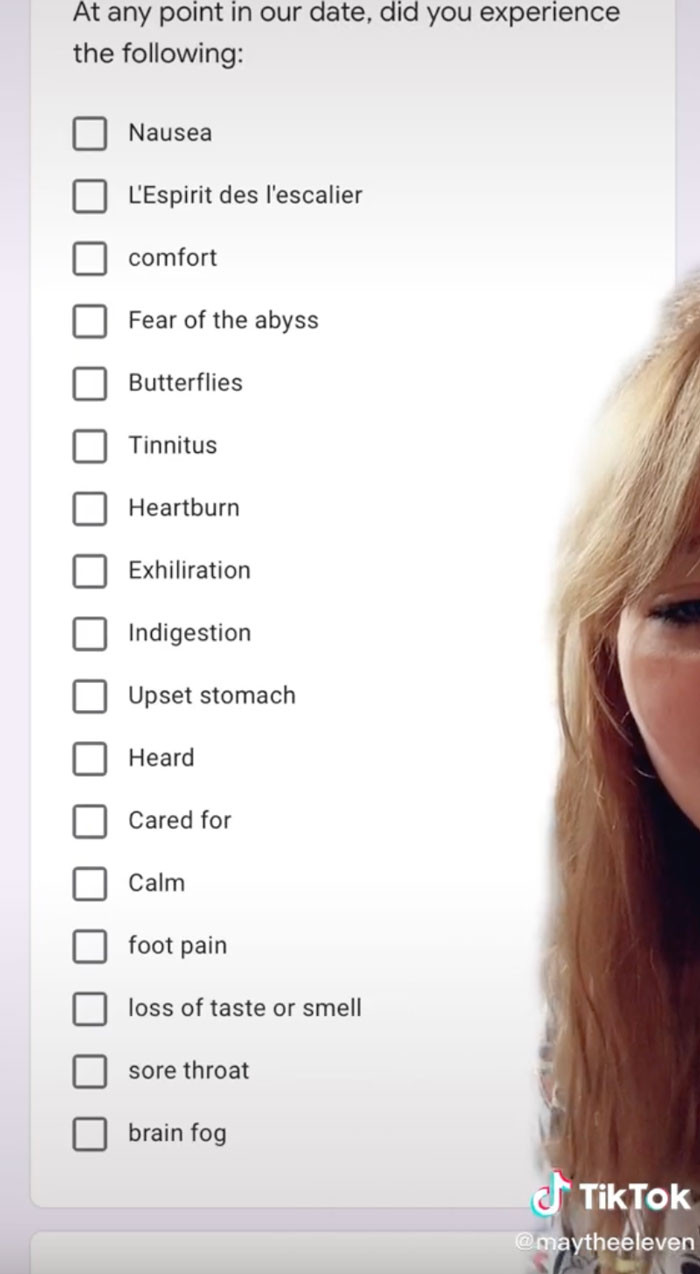 People are praising the guy for his creativity, and this video has received over one million likes. People in the comments were exceptionally intrigued with this Google form.

Here's what some of them had to say:

Not all men though

I want a Google form as well...

He has got the game

Proposing in a Google form

This is your husband...

Well, not everyone experiences a negative emotional drive while dating, as some are still in those high school sweetheart relationships, some have erased their dating applications successfully, while some are using Google forms to ask for dates from their friends.

Anyway, Graham and the OP are currently in a happy distance relationship. Tell us in the comments section if you would consider making a Google form for your future dates!

People Share Those Ridiculous Things Parents Ingrained In Us, And We Can’t Shake Off Now

Company Denies An Employee's Vacation Request And Then Buckles Under Pressure, Pleading With Ex-Employee To Return

Babysitter Calls The Cops On The Mom When She Fails To Come Home On Time, Now The Mom Is Getting Investigated By Authorities